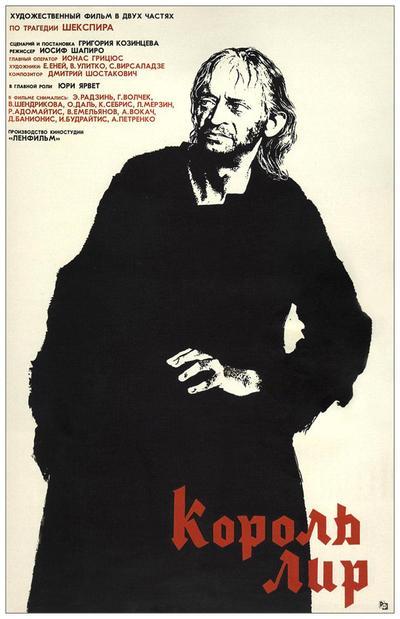 King Lear, old and tired, divides his kingdom among his daughters, giving great importance to their protestations of love for him. When Cordelia, youngest and most honest, refuses to idly flatter the old man in return for favor, he banishes her and turns for support to his remaining daughters. But Goneril and Regan have no love for him and instead plot to take all his power from him. In a parallel, Lear’s loyal courtier Gloucester favors his illegitimate son Edmund after being told lies about his faithful son Edgar. Madness and tragedy befall both ill-starred fathers.

Quote:
Black and white cinematography of Gritsius, the music of Shostakovich and the enigmatic face of Jarvet, makes all other versions of King Lear smaller in stature. Lord Olivier himself acknowledged the stark brilliance of this film. Oleg Dal’s fool lends a fascinating twist to the character. The “Christian Marxism” of Kozintsev can knock-out any serious student of cinema and Shakespeare.

Kozintsev is one of least sung masters of Russian cinema. His cinema is very close to that of Tarkovsky and Sergei Paradjanov. Kozintsev’s Lear is not a Lear that mourns his past and his daughters–his Lear is close to the soil, the plants, and all elements of nature. That’s what makes Kozintsev’s Shakespearean works outstanding.