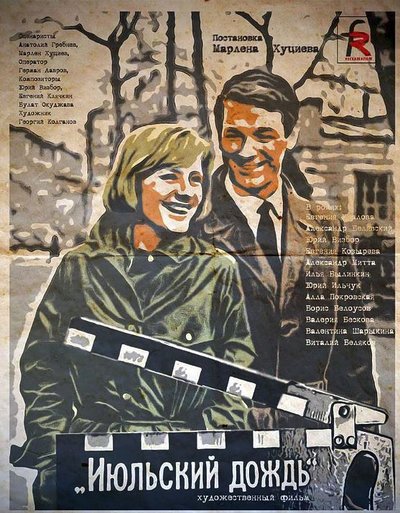 Quote:
Lena is about to marry when she finds out her fiance is a bad person. After leaving him, she seeks for a sense in her life through adventures with artists who are also searching their own identity. When raining, she meets Zhenya.

Quote:
This is the one-film Soviet New Wave. A unique blend of idealism and realism, heavily influenced by Antonioni, nothing like it was ever again achieved – or attempted – in the Soviet cinema as far as I know. The virtually plotless story of a young unmarried couple’s involvement and eventual break-up is told as a series of finely-observed episodes which together form almost an encyclopedia of the time and the place. Among other things, it is a priceless portrait of a somewhat fantastic city which no longer exists.

The film was made in 1966, soon after Nikita Khrushchev’s downfall, when the new conservatives started to dismantle the small creative liberties won after the death of Stalin (and little used, particularly in the cinema). Although the film was not banned, it got only a token release on something like a hundred prints (drop in the sea at the time). The invitation from the Venice Film Festival was declined, and I suppose the film was little seen in the West, if at all. Even in Russia, although its reputation is now high, and it has thankfully been restored (sort of), relatively few people have actually seen it.