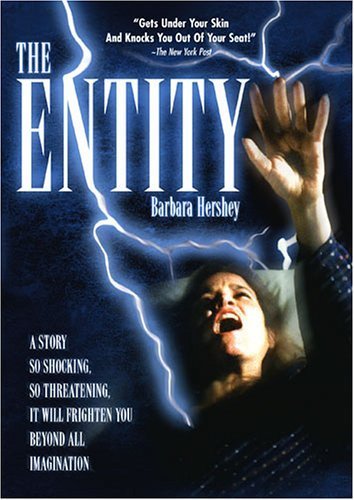 Quote:
This big budget entry from the early ’80s horror boom is one of the most underrated of that genre. The Entity succeeds despite potentially exploitative subject matter because it tells its story in a serious, respectful style. Frank de Felitta’s script devotes as much time to building three-dimensional characters and detailing the inner workings of psychology and parapsychology as it does creating shocks. As a result, the horrific parts of the tale are more effective because they are couched in a compelling reality. That said, The Entity never feels like anything less than a horror movie, thanks to forceful direction by Sidney J. Furie, who uses moody cinematography from Stephen Burum and an obsessive, minimalist score by Charles Bernstein to create an edgy, off-kilter atmosphere guaranteed to keep the audience tense between the set pieces. Finally, and most importantly, The Entity hooks the viewer thanks to phenomenal performances. Barbara Hershey gives a warm, totally credible performance as a decent, strong woman thrust into a bizarre situation, and Ron Silver adds excellent support as a well-meaning psychologist whose desire to find a rational explanation harms the situation as often as it helps. On the downside, a few of the makeup effects aren’t very convincing (especially when compared with strong physical and visual effects) and the open-ended coda might turn off some viewers, but the overall craftsmanship of the film is too strong to be denied. In short, The Entity is worthy of rediscovery by horror fans who want a little substance with their shocks. — Donald Guarisco (AMG)