Quote:
The enigmatically titled Take Care of Your Scarf, Tatjana [Pidä huivista kiinni, Tatjana] is Kaurismäki’s take on the road movie. It represents something of a contradiction for non-Finnish viewers, being one of the director’s most accessible films but also one whose subtleties are unlikely to be fully understood by a foreign audience, and I’m including myself in that sweeping suggestion.

The journey begins when the hulking, coffee-addicted Valto (Mato Valtonen – imagine a Finnish Ron Perlman with a rock ‘n’ roll haircut), who appears to make a living sewing clothing for his intolerant mother, is informed that the house is devoid of his favourite brew. In a quiet rage he locks his mother in a closet, steals her money and hits the road with a portable coffee maker and his vodka-swilling auto-mechanic friend Reino (Matti Pellonpää). When they take a break they are eyed up by Russian Klavdia (Kirsi Tykkyläinen) and Estonian Tatjana (a perkier than usual Kati Outinen), two women looking to catch a ride from these “two dumb Finns.” Despite the language barrier, the women attempt friendly communication with their hosts, only to have both men regress into a coffee and vodka-fueled state of sulking shyness.

The two lead characters may be as forlorn as ever, but the underlying sadness and unbroken misfortune of the Underdog Trilogy is completely absent here, making it one of Kaurismäki’s most openly humorous films. This doesn’t mean it’s crammed with funny one-liners and amusing pratfalls – the comedy comes totally from character moments, whether it be Valto’s peculiar snoring, Reino casually wiping the oil dipstick on his companion’s tie, or the hilarious 2-shot in which Reino gets stuck into a second vodka bottle while Valto stares ahead, jittering with the effects of a caffeine overload. The bulk of the humour stems from Valto and Reino’s cheerless discomfort at their female companions, highlighted when the pair are reluctantly obliged to share hotel rooms with their guests – traditionally a moment for the breakdown of interpersonal barriers and the blossoming of romance, here it proves nothing of the sort, with Reino drinking himself into a stupor and Valto gruffly reluctant to even acknowledge Klavdia’s presence.

This communication gap is clearly about more than gender shyness and it’s here that non-Finnish viewers are likely to miss out, as issues of culture and language and even history enter an equation that many of us do not have all the numbers needed to successfully calculate. But in a film this rich in character detail, this presents no real barrier to appreciation and enjoyment, and for me added an air of intrigue that prompted an immediate phone call my Finnish friends for their insights (which I’d be sharing right at this moment had they had actually been in).

With the barrier between the sexes seemingly insurmountable, the gentle, hesitant hints of attraction that develop seem all the more touching, encapsulated in the quietest of moments, as when Tatjana rests her head on Reino’s shoulder and he nervously puts his arm round her, or in the present that Klavdia later gives to Valto as she boards her train.

The decision to shoot in black and white may well be one prompted by a fondness for road movies of years past (I was occasionally reminded of Wim Wenders’ 1974 Alice in the Cities and 1976 Kings of the Road). It also shifts the narrative slightly out of the here and now, something whose relevance only really registers in the penultimate scene, an outrageous stop for coffee that at first seems like a flashback but proves most likely to be the product of Valto’s fantasy. The implications of this are intriguing. As he returns home to unlock his mother and return to normality, we are left to wonder if, as in fellow minimalist Takeshi Kitano’s 1990 3-4 x jûgatsu [Boiling Point], the entire journey was after all just one of the mind.

Either way, Take Care of You Scarf, Tatjana is a low key delight and probably Kaurismäki’s most upbeat (fictional) movie to date. It’s winning example of the appeal of this particular director’s style, and proof positive that unhappy people do not necessarily make for an unhappy film. 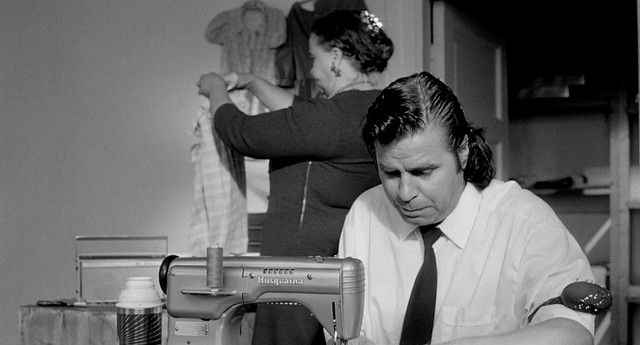 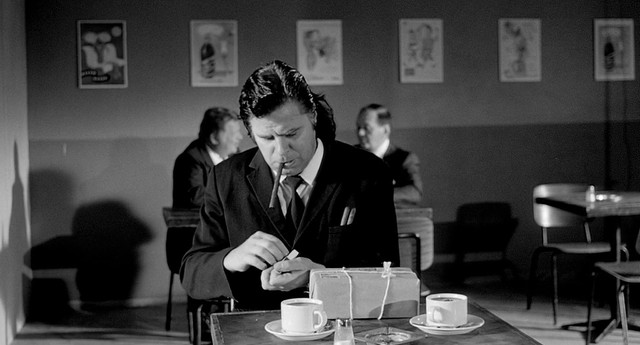 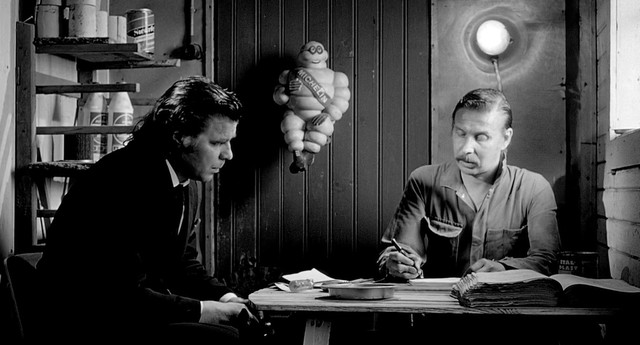 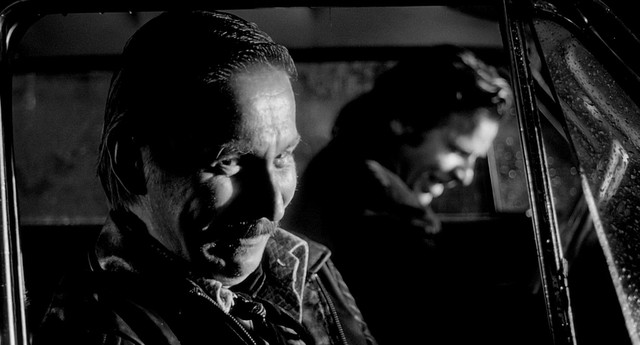