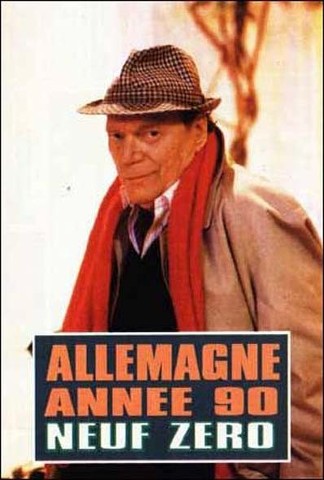 Lemmy Caution investigates a German ruins.
Quote:
Jean-Luc Godard’s Germany Year 90 Nine Zero – the title being a pun on Roberto Rossellini’s Germany Year Zero (1947) – was made for French television in 1991 and continued his reflexive cinema/video image/sound practice that reached its zenith with Histoire(s) du Cinéma (1989-97). Germany Year 90 Nine Zero can be considered a sort of loose sequel to Godard’s Alphaville (1965). The film follows the adventures of Lemmy Caution (Eddie Constantine), “the last of the secret agents,” as he wanders through a post-Berlin-Wall Germany (from the East to the West) through a landscape littered with history. It is 26 years later, and Lemmy is looking exhausted, vulnerable, as befits the landscape of East Germany.

Previous: Cecil B. DeMille – Samson and Delilah (1949)
Next: Kinji Fukasaku – Bakuto gaijin butai AKA Sympathy for the Underdog [+extra] (1971)