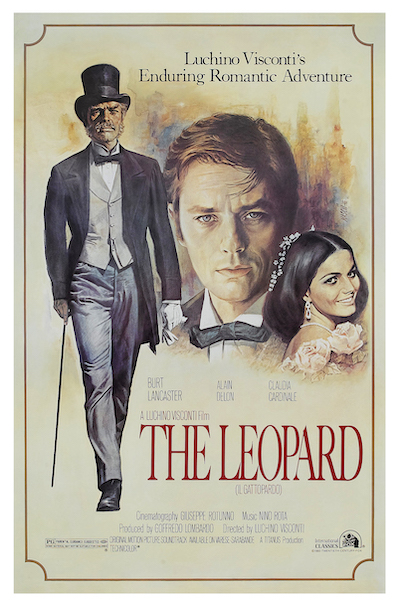 Quote:
The Leopard is more than a tad too pleased by its own spots, but in this case the source material and its director’s intentions were almost accidentally an appropriate match. The film is based on Giuseppe Tomasi di Lampedusa’s 1958 bestselling historical novel, which, all literary credentials aside, probably hit the exact same nerve in Italy that Margaret Mitchell’s Gone with the Wind did in America 20-odd years prior. Like the 1939 MGM adaptation of Mitchell’s Civil War soap opera, The Leopard seems more interested in the behavior of textiles and the performance of its own art director than it is with accurately depicting a truly historic national moment.

Director Luchino Visconti’s excessively, well, excessive adaptation tells at great length and expense the tale of Don Fabrizio Corbera, the Prince of Sicily, watching with great resignation the passing of his era and the birth of the successive one. The aristocratic way of life that assured him social prominence no longer applies as the 1860s bring about Italy’s tumultuous Rigorgimento, a situation brought even more harshly into focus when Fabrizio’s nephew Tancredi Falconeri (Alain Delon, Visconti’s flawless muse as ever) announces his intentions to marry the daughter of Don Calogero Sedara, who, as a former pauper-turned-venture capitalist, had to fight tooth and nail to achieve what Fabrizio had handed to him. The arrangement to give Calogero’s daughter Angelica a smashing social debut is emphasized as a cataclysmic but genteel handing over of the reigns from aristocracy to democracy. (In the novel, the irony is that Calogero comes to more closely resemble Fabrizio than vice versa. Whether acquired by nature or nurture, money overrides all.)

Visconti’s stylistic approach to the unwieldy material is to, simply, not wrestle with it at all. Instead, he embraces its novelistic conceits, climaxing with a luxurious rendition of Angelica’s ball that sides rather baldly with the old way. In that sense, Visconti’s internal apparatus also functions as a comment on its own place in movie history. Transpose, if you will, the role of 19th-century aristocracy upon the old-guard, classical narrative tradition of 20th-century filmmaking that Visconti once, as one of Italian neorealism’s founding fathers, worked to unravel. Now consider the revolutions that rock Fabrizio’s increasingly obsolete lifestyle against what was actually going on in the film world during The Leopard’s production—chiefly what was going on in France alone, but even to an increasingly prominent sense what was happening across the Atlantic. (As Michael Gebert once postulated, Old Hollywood died the minute Bette Davis and Joan Crawford’s sags and wrinkles first sent shudders through the crowds that flocked to see What Ever Happened to Baby Jane?) Each time Burt Lancaster’s leonine patriarch sighs as Delon (fresh off of the set of Michelangelo Antonioni’s L’Eclisse) lives up his era-straddling moment, it becomes increasingly clear that The Leopard speaks on behalf of the white elephants.