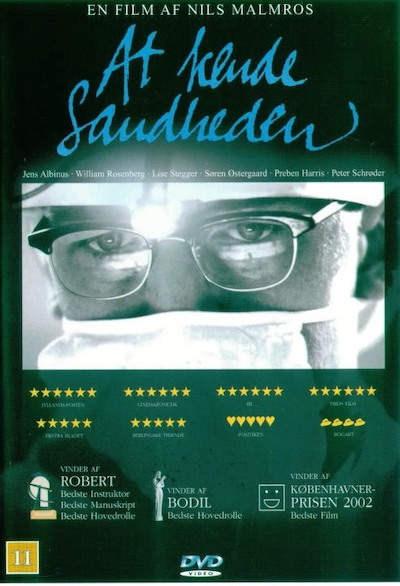 Quote:
The boy has suffered a stroke, leaving one entire side of his body paralyzed. Dr. Malmros (Jens Albinus) is one of the best men in the whole of neurosurgery, and his exceptionally steady hands make him a prime candidate to operate on children. Working quickly and efficiently, he injects the boy with a chemical called a contrast medium to help photograph the blood vessels in his brain, locates the injured blood vessel, and ties it off. Yet another life saved. Except that decades later, the same boy will die of liver cancer—caused, ironically enough, by the same radio-emitter chemical used to save his life.

This is the dilemma that is set up in the first few minutes of Facing the Truth, a powerful and moving story taken from the real life of a doctor who garnered great fame in Denmark, but fell out of favor for intensely personal reasons. It is not exclusively about the medical controversy, although that forms a big part of the story’s arena, but is really about the weather of a man’s spirit, and how he deals with hardships that come in spite of him being a good man and a skilled doctor. The film was directed by Nils Malmros, the real-life son of the real-life Dr. Malmros, and there isn’t a moment in it that feels inauthentic or forced.

Truth starts with the above event, in 1943, and skips forward decades to when Malmros’s son, now an adult, discovers that his father is obsessively reviewing all of the cases he treated where the contrast medium was used. He feels responsible, and cannot divorce himself from everything that has happened—no, not even when he was saving lives in the process. He has become the target of an investigation by the country’s medical board, and even when they give his work a clean bill of health, so to speak, a medical journalist becomes suspicious and begins to dig up dirt on both him and his cronies.

The whole affair causes Malmros to do something with his son that he hasn’t ever done, no thanks to him being absorbed in his work during the younger man’s entire childhood. He begins to tell him of his own life—his youth during WWI, in Denmark, where his family was ostracized for being poor. The poverty they struggled with was not cut-and-dried, though, and even at that age the doctor-to-be could see what was wrong. His father, a dockworker, was forbidden from working because of the naval blockade, an d his mother was forced to take in laundry and seamstress work to make ends meet. The father prefer red to drink and hoard his misery. When the boy’s schoolteacher quietly informs them that their son is a prodigy and should be moved into something better than public education, his father’s response is so indifferent and hurtful that the audience feels its sting as much as the boy himself does.

But somehow he triumphs over that, and moves on to other struggles. His aunt has plenty of money to spare, and withholds it out of some perverse sense of not lavishing charity on those who do not fear God properly. He manages to convince her to finance his medical education, and silently bears up the humiliation of having him betray her and leave him deep in debt. He finds himself the object of affection by a warm, motherly woman, and reciprocates it almost without quite knowing why or how. He tries to do pioneering work in his field, and winds up getting into neurosurgery almost by accident, where he learns he has a natural aptitude.

And then other complications arise, like a clash of wills between him and a colleague, Riber. When Malmros leaves for America for a time, Riber continues working in his stead, and accomplishes things that Malmros feels are embarrassing to his senior position. Or is it that simple? The movie shows us that none of the conflicts we see exist on any one level. Unlike other movies, this isn’t a case of mere ego, with the other guy painted as a dummy or a monster; they’re both shown to have valid reasons for reacting as they do to each other’s behavior.

Most movies about social issues, like the lamentable Erin Brockovitch, are content to only show one side of things. There are no villains in this film, simply people who have sharply contrasting points of view borne from their experience. Late in the movie, we see that the journalist digging up damaging hidden evidence is deprived of knowing a critical part of the truth when Malmros declines to be interviewed by him. Why? Because Malmros is not convinced that anyone except him has the patient’s best interest at heart; because he is only too certain that his words will be twisted and used against him. The journalist is only too happy to bask in the limelight of a national award while Malmros nurses his bitterness in private. Who is right? The movie wisely does not say, because this is not a case of right vs. wrong. It is more complex than that, complex in the way good fiction makes its case rather than the typical simpleminded formulas of movies.

Truth earned several major awards in its native Denmark, and it’s not hard to see why: it’s one of the wisest and most compelling movies I’ve seen in a long time. It is also beautifully mounted, with razor-sharp black-and-white wide-gauge photography that keeps our attention on the characters at all times. The performances are also uniformly outstanding, and there’s a very good sense of continuity in Malmros’s lifetime through all three actors who play him. Nils Malmros, himself a surgeon, filmed several real-life brain surgeries to bring an additional level of realism—although he wisely keeps those scenes from being too graphic, thanks to the black-and-white photography. In fact, at one point he plays explicitly on this very issue: he has a Nazi collaborator thug peer a little too closely at a surgery in progress and faint dead away when he realizes he’s looking at the inside of so meone’s head.

The beauty of a film like this is how it is able to show the doctor as being a flawed man, but not a bad man, and therefore all the more compelling. One of the components of tragedy is that we are able to feel something in common with the tragic hero, and with Malmros, it’s not hard to find something in our own life that parallels his. For all his work, for all his genius, for all his accomplishments, he has nothing to show for it but guilt, debt, and the recrimination of the world. Why? Not because he was bad, and certainly not because he stood his ground on issues that he felt strongly about, but because he believed that just taking his stand would be message enough to the world around him. It is one thing to be punished for being evil, and another thing entirely to be punished for being the wrong kind of good.

Radu Jude – Film pentru prieteni AKA A Film for Friends (2011)