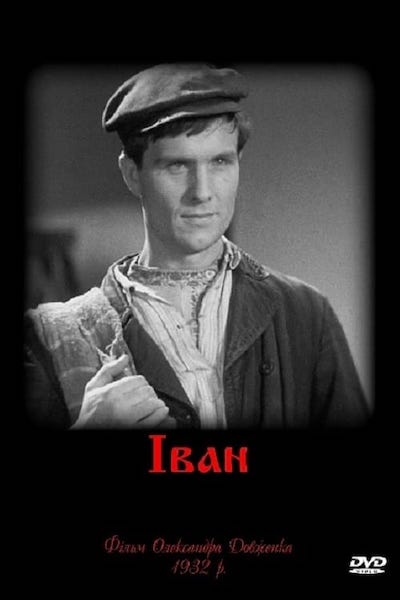 A young farmer and his lazy father try to help with the construction of the Dniprohes, but he learns that strength is not enough for a worker and joins the Communist party.

Quote:
When sound was added to cinema, film lost its unique visual quality and sensibility; sound diminished film’s capacity for artistic expression. Film artists continued to use silence in an expressive and meaningful way, but it was the silence of the whole thing that contributed to the extraordinary depth, intensity and urgency of such masterpieces as Pudovkin’s Mother (1926), Eisenstein’s October (1927), Vertov’s Man with a Movie Camera (1928) and Dreyer’s Passion of Joan of Arc (1928). Silence is an important part of the “language” of true cinema.

One of the two or three greatest silent works, Earth (1930) came from Aleksandr Dovzhenko, the Ukrainian visual poet. Dovzhenko made this film in response to another (wonderful) film, Sergei M. Eisenstein’s The General Line (The Old and the New, 1929). Dovzhenko in Earth was expressing his own view of “the old and the new.” Stalin disapproved of it, as a result of which Dovzhenko’s father was exiled from his cooperative farm. For this and other reasons, Dovzhenko arrived at the making of his first sound film in what has been described as a suicidal depression.

Ivan is a transitional work between silents and sound films. It is thus to be grouped in this regard with such works as Sternberg’s The Blue Angel (1930) and Dreyer’s Vampyr (1932). The film is full of industrial sounds, partly inspired by Dziga Vertov’s Enthusiasm the year before, and of course speech, but whenever a phone receiver is picked up or returned to its cradle we hear nothing. (Our own The Jazz Singer, the “first talking picture,” 1927, was for the most part a silent.)

Ivan is very good, even excellent, but agitated, troubled; its emphatic acting and flourishes of avant-garde editing—several times, a snippet of film will be repeated over and over in succession—don’t always serve the film well. It is a noble work, with a noble and highly unusual theme: that in order to ensure the future success of the nation, laborers must work not only hard and spiritedly, as youth are inclined to do, but also competently, efficiently, skillfully. The arrogance of youth must yield to the rigor of training and learning, for the industrial environment makes demands and holds sudden dangers beyond those that one encounters on a farm. Every worker is precious, vital; workers must know what they are doing in order to survive and to ensure that the young nation will also survive and prevail.

The central character is an unschooled teenaged farm boy. He and his father, along with numerous others there, must leave, for the success of their farm work—in retrospect, a grim inadvertent irony—makes their agricultural tenure superfluous. The boy and his father and others thus leave their country village to participate in the Dnieper River dam-building project. Ivan is eager to prove himself. His first industrial labor takes strength, which he possesses in abundance; he is pounding spikes in the building of a railroad. In a marvelous subjective-expressionistic montage we see the boy, aglow, drinking in the applause that he imagines his labor entitles him to. But his work is deemed “sloppy” by the foreman, deflating the boy, who resorts to another adolescent fantasy—but this one, instead of preening, anxious: himself, standing, explaining to a seated committee that the foreman hadn’t even inspected his work. The film patiently tracks the boy’s progress as he himself comes to realize his need to submit to the discipline of training and education. At the end, we see him, along with countless other youth, in a huge lecture hall—a scene that indicates the “book-learning” that must precede his becoming a responsible crane operator. Thus Dovzhenko, a former science teacher, is able to end Ivan on a note celebrating education and the trainability of youth.

Three passages are brilliant. One opens the film; sheer visual poetry, it is as beautiful as anything in Earth. The tracking camera glides, seemingly endlessly, along the river, capturing the reflection of sky and trees in the water; cuts indicating the redirection of the camera add complexity to the liquid beauty, like the facets of a cut, polished diamond. This long, mesmerizing passage accumulates into an image of perfect placid loveliness, but also, ironically, of complacency and total idleness; thus the camera finally shifts to a visual symphony of crashing water, the power that the built dam will harness, to fuel the nation’s growth and progress. Dovzhenko and John Ford are often compared for their similar investigations of the relationship between the individual and his or her community. The opening of Ivan suggests another kinship of theirs: a gift for visual irony.

The second brilliant passage finds Ivan upon his arrival with his father at the industrial camp. It is dark night; a new life awaits the boy the next day. He looks out the window and sees that “day,” an industrial complex of belching machinery, construction, endlessly useful toil: the whole promise of tomorrow. Nothing else in cinema matches this passage for illuminating the hopefulness of youth.

The third brilliant passage begins with a mother covering the corpse of her young son, who has just been killed in a construction accident. The boy’s name is Ivan, like that of the hero (who as easily might have been the casualty), and it’s the name, also, of another, studious boy—an image of the kind of boy that the hero will eventually become. (Both living Ivans have fathers but no mothers; by the end of the film, the deceased Ivan’s mother has evolved into a transcendent figure: the Mother of the Working Class.) This woman tears from her son’s body on the ground and starts running; amidst noisy industrial machinery, dodging cranes and other devices that are shot from the vantage of low, upwardly facing cameras in order to suggest their attacking her, she keeps running, running. Her destination: the office of the man in charge of the dam-building operation. He is speaking on the telephone. Having heard of the boy’s death, he is instructing that safety precautions be instituted to minimize the risk to workers. Now he notices the woman standing silently in his office. He asks her what she wants. Satisfied with what she has just overheard, she replies, “Nothing!”

Some may find the woman’s quick departure from grieving for the sake of a larger, unselfish concern somewhat forcing the film’s unifying theme. I relate its abruptness to Dovzhenko’s typical refusal to milk moments of death, to avoid the risk of cheapening the authentic tragedy of lost lives with sentimentality—a tendency of his derived from the circumstances of his own family history. Dovzhenko was one of 14 children, only two of whom survived long enough to reach adulthood. (A sister was the other.) The deaths and burials of his siblings, he often noted, haunted him his entire life.

With its three best passages, then, Ivan has more greatness in it than most great works. Unfortunately, in pursuit of its finish it also relaxes its poetry and drops into prose. This may be preferable to pursuing poetry to the point of becoming specious, poetical, that is, rather than poetic, but it’s mightily disappointing nevertheless. Dovzhenko’s two masterpieces, Arsenal (1929) and Earth (1930), are visionary films, poetic from start to finish. Earth remains one of my two or three favorite films, and the war film Arsenal is also on my list of the 25 best films ever made. For all its captivating qualities, Ivan is not in the same league.

Dovzhenko’s finest collaborators on the film are his cinematographers, Danylo Demutsky, Yuri Yekelchik and Mikhail Glider—although even here the work is inconsistent. (It may be a matter of which cinematographer cinematographed what.) Pyotr Masokha, personifying country youth, plays the central character, and he is appealing and strikingly handsome. Most of the other parts are very broadly drawn. 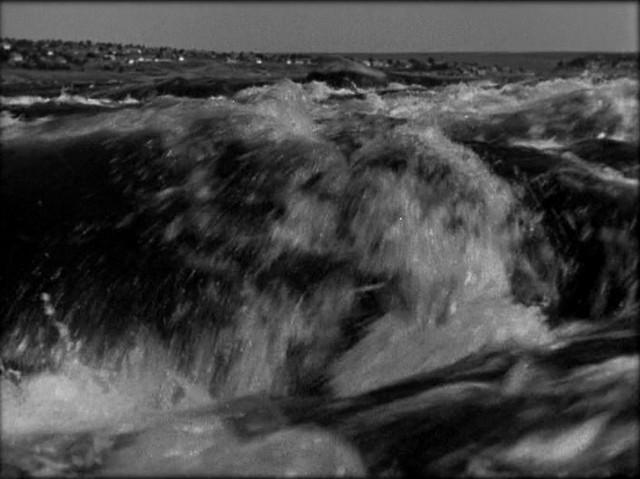 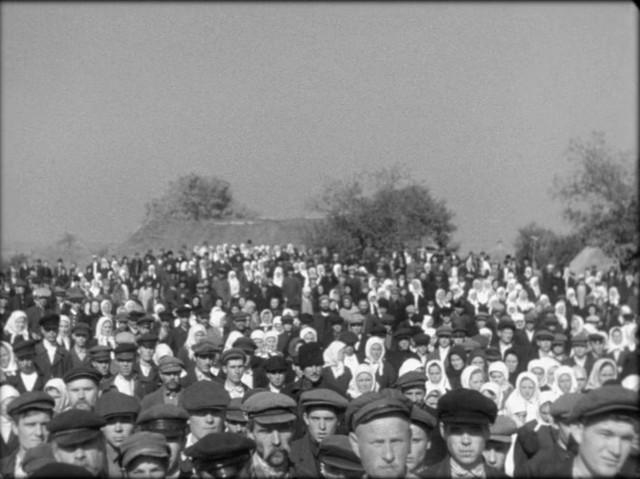 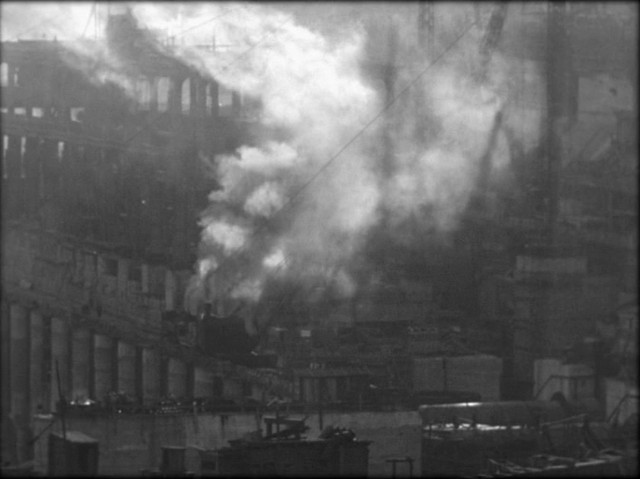 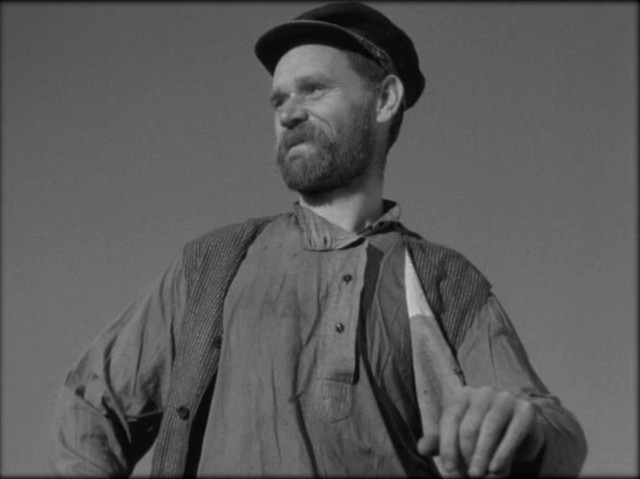