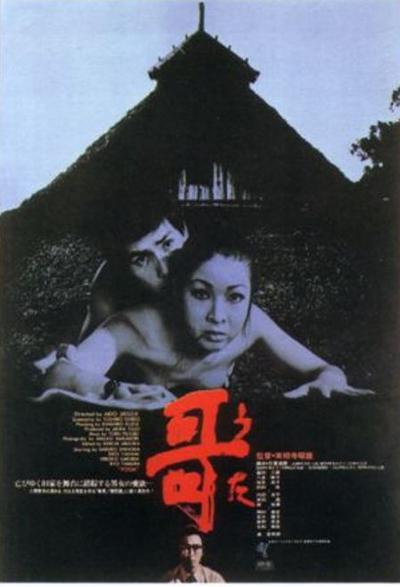 Quote:
Poem is the last film in Jissoji’s Art Theatre Guild trilogy and deals with the traditional stem-family system on the verge of collapse allegorically. Not very satisfied with the optimistic last scene of Mujo, Jissoji approaches a similar subject matter from a different perspective. And the film is more in line with his concern about the radical change in the society which prompted him to make the trilogy. It appears that the script was written through intense discussions between Jissoji and Ishido, this time too. END_OF_DOCUMENT_TOKEN_TO_BE_REPLACED

During the 1950’s, a Tokyo woman from a wealthy family has been pregnant for 20 months while her husband has been missing for a year, apparently after vanishing from inside a locked room. She lives with her mother in a big house that seems to be part of the key for the long delayed delivery. Sekiguchi, a young novelist has a lukewarm interest in the case, sparked by hallucinations or, as they’re called in the film, revelations. The affair is far from private, terrified people ask for police intervention, riot and threaten to break into the house… END_OF_DOCUMENT_TOKEN_TO_BE_REPLACED

Blue Lake Woman tells the story of Nagare, a painter who wanted to commit a lover’s suicide with Mizue, the wife of his friend and patron Takigawa. Growing afraid at the last moment, he doesn’t go through with it – but Mizue sinks to the bottom of Blue Lake. Some time later, Nagare follows an invitation by Takigawa, who claims to have forgiven everything. To Nagare’s shock, Takigawa’s new wife, Ameko, looks exactly like Mizue. While staying as Takigawa’s guest, Nagare becomes haunted by Mizue’s ghost, who wants to be reunited with him at the bottom of Blue Lake… END_OF_DOCUMENT_TOKEN_TO_BE_REPLACED

Synopsis
One night, a woman is allegedly raped by a man. Even though the man denies the charges, he ends up being prosecuted. After that, his lawyer tries to investigate wether his client is guilty or not. END_OF_DOCUMENT_TOKEN_TO_BE_REPLACED

Synopsis :
A decadent Count in 1920’s Japan becomes obsessed with the works of the Marquis de Sade. He creates a theatre to show plays adapted from the notorious writers novels, and recruits a variety of theives, prostitutes and low lives to act out his fantasies on stage for the delight of his rich and decadent friends.
In search of new sensations, the nobleman orders one of the actors, on pain of death, to make love to the noblemans wife while he watches. Unfortunately, this incursion of real life into his fantasy world will have dire consequences for the count and his coterie.
Full of startling images and with a gripping storyline, this film is a feast for the eyes and mind. A classic waiting to be discovered. END_OF_DOCUMENT_TOKEN_TO_BE_REPLACED

A demonic reincarnation of a Japanese general from the 10th century appears in the early 20th century Tokyo with a mission to destroy the blooming city. END_OF_DOCUMENT_TOKEN_TO_BE_REPLACED

Here’s Jissoji Akio’s impressive theatrical debut. Distributed by ATG and with a script by Oshima Nagisa, it’s a fascinating dissection of 1960s Japanese youth angst. Oshima wrote the screenplay for television in 1964, but due to the subversiveness of the story it never got made there. Which doesn’t come as a surprise, considering that the film consists of four students in a room, who decide to leave the gas on and bet money on who will stay there the longest… END_OF_DOCUMENT_TOKEN_TO_BE_REPLACED