Synopsis:
In Paris, the ex-cop Choucas is a private detective that works with a mysterious partner, Tarpon, and the secretary Charlotte. He is presently working in an embezzlement case of an employee of the pharmacist Jude. When the middle-aged Isabelle Pigot hires him to investigate the disappearance of her blind twenty year-old daughter Marthe Pigot that worked at the Drillard Foundation for blinds, the Police Inspector Coccioli seeks Choucas out and asks him to drop the case. But Choucas proceeds with the investigation and schedules an encounter with Isabelle in a square, but she is murdered with a shot on the forehead. END_OF_DOCUMENT_TOKEN_TO_BE_REPLACED

Synopsis:
Jacques Darnay (Delon) is released after having served ten years in prison for robbing a jewelry store. Much about that crime remained a mystery: the stolen diamonds were never recovered, and no one knows exactly how Charby the jeweler died. At his trial it was declared that Darnay acted alone, yet the size and complexity of the heist make that seem highly unlikely. Darnay’s release is anxiously awaited, by both the police, who hope he’ll reveal more information about the crime, and by some of Darnay’s former friends, who have a few ideas as to what might have happened to the diamonds. Having, perhaps, played in his years enough of both, Delon is the perfect point man in this duel between cops and crooks, capitalizing on each side’s strengths and weaknesses while decidedly pursuing his own agenda. END_OF_DOCUMENT_TOKEN_TO_BE_REPLACED 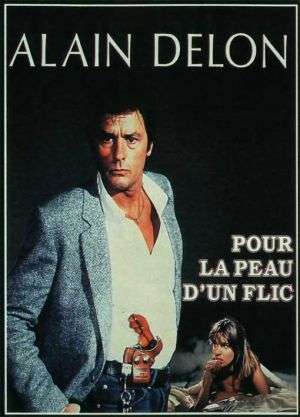 French cinema of nineteen eighties was known for its numerous popular films which gave a new dimension to box office collections.”Pour La Peau D’Un Flic” is one such film which is not so much known by ordinary film viewers both in France and elsewhere.This might have something to do with the manner in which this film was distributed. It is sure that loyal Alain Delon fans would be aware that this film marked the beginning of his directorial career in 1981.Alain Delon gives one of his career’s finest performances as a detective who would go to any length in order to bring cold blooded criminals to justice.As a film director he has not fought shy of portraying what ails police forces in France.In “Pour La Peau D’Un Flic”,policemen are shown as real human beings with their fair share of weaknesses.Alain Delon’s acting performance has too many shades of similarities with American actor Al Pacino although it would be politically incorrect to suggest such a comparison.This is a good film for all those people who would like to see Alain Delon both as an actor as well as a director in a same film. END_OF_DOCUMENT_TOKEN_TO_BE_REPLACED