Synopsis:
Seyrig is a fortyish widow dealing antique furniture from her apartment, who invites an old flame she hasn’t seen since the Algerian war to visit her and her troubled eccentric filmmaker stepson (Thierre), whom she shares an apartment with in Boulogne (a city in the provinces). The stepson is a recent veteran of the Algerian war who can’t escape the memory of a young girl named Muriel he tortured and killed during the war, as he watches grainy 8mm film clips of newsreels which remind him of the Arab girl. END_OF_DOCUMENT_TOKEN_TO_BE_REPLACED

Quote:
Simon secretly loves Camille. Camille, due to a misunderstanding, falls for Marc Duveyrier. Marc, a handsome realtor, who’s also Simon’s boss, is trying to sell an apartment to Odile Lalande, Camille’s sister. Odile really wants this apartment, despite the silent disapproval of her husband, Claude. Claude, somewhat wan in character, finds it hard to stomach the reappearance, after many years, of Nicolas. Nicolas, an old friend of Odile’s becomes the confidant of Simon… The dialogue is in part made up of extracts of French hit songs, sung in situation by the actors. END_OF_DOCUMENT_TOKEN_TO_BE_REPLACED

Quote:
The film narrates a utopian abandonment, consensual and festive of the market economy and high productivity. The population decides on a number of resolutions beginning with “We stop everything” and the second “After a total downtime will be revived-reluctantly-that the services and products including lack will prove intolerable. Probably: water to drink, electricity for reading at night, the TSF to say “This is not the end of the world, this is an 01, and now a page of Celestial Mechanics”. The implementation of these resolutions is the first day of a new era, Year 01. END_OF_DOCUMENT_TOKEN_TO_BE_REPLACED

A cinematic puzzle, Alain Resnais’ Last Year at Marienbad is a radical exploration of the formal possibilities of film. Beautifully shot in Cinemascope by Sacha Vierny, the movie is a riddle of seduction, a mercurial enigma darting between a present and past which may not even exist, let alone converge. The film stars Giorgio Albertazzi as an unnamed sophisticate attempting to convince a similarly nameless woman (Delphine Seyrig) that they met and were romantically involved a year ago in the same enormous, baroque European hotel. END_OF_DOCUMENT_TOKEN_TO_BE_REPLACED 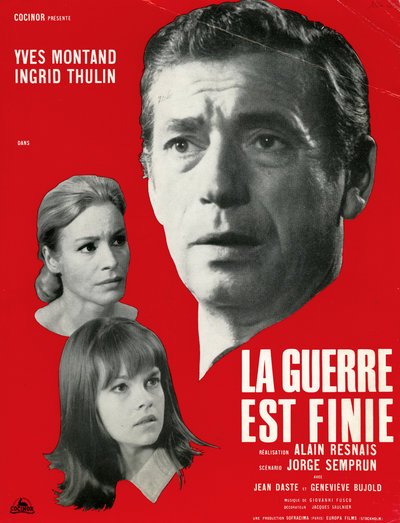 from rogerrobert.com
The hero of the film (Yves Montand) is a Spanish citizen who has been engaged ever since the war’s end in a variety of underground anti-Franco movements. He is part of a network that moves people and information in and out of Spain, prepares reports, calls general strikes, prints propaganda newspapers and does everything else that seems to be indicated. But the members of the underground are weary; they subscribe to political dogmas that no longer seem relevant, except to a few of them; they can show few tangible results. END_OF_DOCUMENT_TOKEN_TO_BE_REPLACED 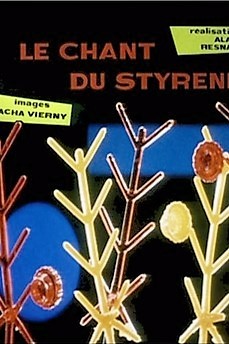 Quote:
From a plastic bowl to petroleum, we trace back through the complete industrial process that leads to the manufacture of plastic objects. The force of the commentary composed in alexandrine verse by Raymond Queneau matches the wide screen of CinemaScope proportions. END_OF_DOCUMENT_TOKEN_TO_BE_REPLACED

SYNOPSIS from amg
Running a mere two reels, Van Gogh was fledgling filmmaker Alain Resnais’ first effort in his documentary series about famous artists. Produced by Pierre Braunberger, who would underwrite most of Resnais’ classics of the 1950s and 1960s, the film won several international awards. Concentrating on Van Gogh’s paintings, Resnais charts the artist’s self-destructive streak and descent into madness — and at the same time celebrates his brilliance and “lust for life.” The narration was written by G. Diehl and R. Hessens. The music, which many reviewers felt was the film’s strongest asset, was by Jacques Besse. END_OF_DOCUMENT_TOKEN_TO_BE_REPLACED