As Chris Marker’s fans already know, Kinopoezd was a project by Alexandr Medvedkin, Soviet filmmaker and though he isn’t mentioned in the titles, he was a main locomotive in this crazy journey.
Train was full of with film prints, editing tables, actors and it traveled through Soviet Union, films were made in one day, edited at night and very next day shown to the people, who participated in it, as Marker says. END_OF_DOCUMENT_TOKEN_TO_BE_REPLACED

Description: Soviet documentary “defending the Chinese people from their enemies, the Maoists”. NB: The film clearly documents the activities of the Red Guards although it never mentions them by name. This has been reflected in the cataloguing. Also, ‘Peking’ has been used instead of ‘Beijing’, again to reflect the content of the film. END_OF_DOCUMENT_TOKEN_TO_BE_REPLACED 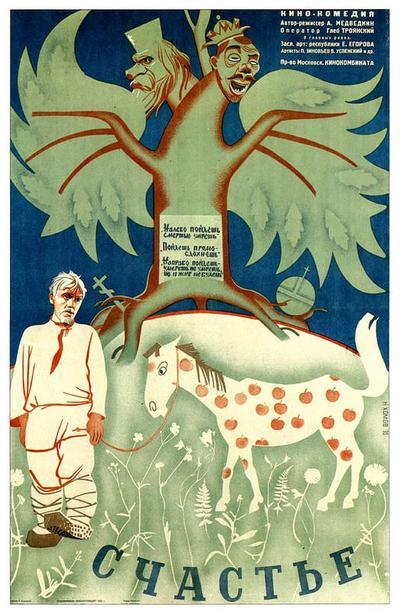 Aleksandr Medvedkin’s Happiness, as rowdy as any Soviet silent movie, is a comic parable composed of equal parts of Tex Avery and Luis Buñuel. It satirizes the plight of a Soviet farmer who finds himself providing for the state, the church, and his peers at the expense of his personal satisfaction. A hapless young prole, Khmyr, is tasked by his wife with the goal of going out in the world and finding happiness, lest he end up dead and dissatisfied after a lifetime of toil, like his father. Through stylistic exaggeration and a systematic attack on pre- and post-Revolutionary Russia’s dearest institutions, the movie achieves a wide-ranging, and deeply wounding, attack on the limitations placed on personal freedom in Russian society END_OF_DOCUMENT_TOKEN_TO_BE_REPLACED