Description:
Based on the novel «A Ticket to the Stars» by V. Aksenov. After final examinations at school four friends went to Tallinn for the first time without annoying surveillance of their parents to taste serious life. END_OF_DOCUMENT_TOKEN_TO_BE_REPLACED

Synopsis:
“The title character (Tatiana Samojlova) is a dutiful wife to Karenin (Nikolai Gritsenko), a minor political functionary, and mother to a young son, when she meets a dashing young military man, Count Vronsky (Vassily Lanovoy). Something sparks between them, and soon they are madly and passionately in love. But such an illicit relationship is very much frowned upon in polite Russian society, and there are numerous consequences to their love. But by the same token they find themselves unable to live without each other, and so their relationship is subject to severe stresses as they try to live their lives in peace.” END_OF_DOCUMENT_TOKEN_TO_BE_REPLACED 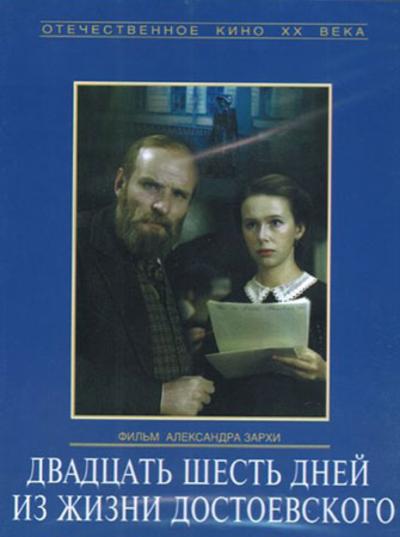 Twenty-Six Days in the Life of Dostoyevsky was entered on February 16th at the 1981 Berlin Film Festival to commemorate the 100th anniversary of Dostoyevsky’s death on February 9th, 1881, and won a “Best Actor” award for Anatoly Solonitsyn as Dostoyevsky. Solonitsyn was a favorite actor in Andrei Tarkovsky’s films, and this was to be his penultimate role. This brief imaginary period in the famed Russian writer’s life encapsulates one of his darker moments in 1866. At that time he was still a relatively unknown writer whose first widely acclaimed work, Crime and Punishment, was just on the horizon. His life was at a very low ebb as he struggled with debts he could not pay, and as he fought depression over the loss of his wife to tuberculosis, and the death of his brother, who was very close to him. His first literary journal had to be scrapped because of political reasons, and the second venture needed funding. The police come to see him, sent by his publisher who is demanding recompense for debts overdue. Desperate to escape the pressure on all sides, Dostoyevsky decides to undertake the impossible and write the story of The Gambler in 26 days, thereby satisfying the debt to the publisher at least. END_OF_DOCUMENT_TOKEN_TO_BE_REPLACED