This story, that takes place during one day, tells about male meanness and ever-hard female destiny… The action takes place against the background of the first hits of the young group “Nautilus Pompilius”…

The first professional work of the director Alexey Balabanov, who at that time worked as an assistant at the Sverdlovsk Film Studio. The film was a teaching work, filmed while studying at the Higher Courses of Scriptwriters and Directors. END_OF_DOCUMENT_TOKEN_TO_BE_REPLACED

Arriving in Moscow, Danila discovers Konstantin dead and he sets out to avenge his death; a journey that leads him to Chicago and a whole new experience. END_OF_DOCUMENT_TOKEN_TO_BE_REPLACED

Aleksey Balabanov – Zamok AKA The Castle (1994)

Quote:
The Castle (Russian: Замок, translit. Zamok) is a 1994 film directed by Aleksei Balabanov. It is the first notable screen version filmed in Russia of Kafka’s unfinished novel of the same name. It is a sophisticated and ambiguous parable of an individual desperately trying to preserve his identity while struggling against sinister and invisible bureaucrats who rule the village from inside the titualr castle. This funny, somewhat bizarre, and distinctive movie won official selections to film festivals in Montreal and Rotterdam, and two national Nika Awards.

The film was also noted for its original soundtrack by Sergey Kuryokhin and costumes/sets design in bruegelian style. The stars of the film include Nikolay Stotsky, Svetlana Pismichenko, and Viktor Sukhorukov. END_OF_DOCUMENT_TOKEN_TO_BE_REPLACED

Synopsis:
A young woman is taken hostage by a police officer and subsequently abused by the lawman gone mad.

Review:
The term Cargo 200 refers to the bodies of USSR soldiers brought home from Afghanistan in the 1980s, but in Aleksei Balabanov’s film of the same name every character seems destined to become Cargo 200, either actually ending up dead or at least ending up in a dead-end quagmire of pointless violence and immoral behaviour. Unflinching would be a gentle word to describe this portrayal of a doomed humanity, but the exact point of the film beyond its doomsday message is never really clear. Unlike other recent excursions into nihilism as expressed through heartless sex and pointless violence (Mortier’s Ex Drummer comes to mind as a recent example), Balabanov’s film never goes beyond stating the obvious. END_OF_DOCUMENT_TOKEN_TO_BE_REPLACED

Aleksei Balabanov – Kochegar aka A Stoker (2010)

The stoker is a veteran from the Afghanistan war, retired major and hero of the USSR who spends his life in a heating chamber writing a book and trowing coal on the fire. From time to time an old friend , veteran as well , pays him visits to throw in the fire something more than coal.The bales seem to be human bodies but the stoker doesn’t care because his friend tells him they were bad people.
The stoker’s beautiful daughter which lives with him only visits her father to ask him for money. The only interested in his work are two little girls that ask him the most surprising questions. END_OF_DOCUMENT_TOKEN_TO_BE_REPLACED 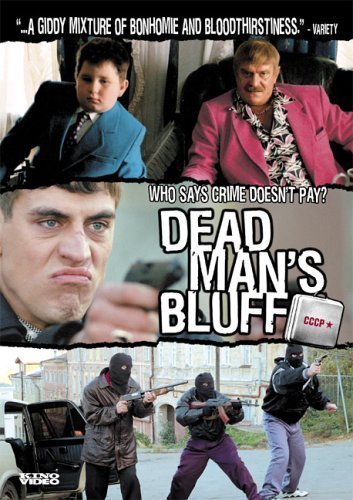 Quote:
When brothers Simon and Sergei bungle an important drug deal on behalf of the local crime kingpin, they’re forced to make up for it by retrieving a lost batch of heroin. Trouble is, they have no idea where to begin. This shrewd gangster satire includes some 20 Russian film stars among its ensemble cast, cleverly costuming each big name to leave viewers guessing who’s who. END_OF_DOCUMENT_TOKEN_TO_BE_REPLACED