Quote:
Made immediately following the end of the war, Blasetti’s Un giorno nella vita follows
the trend of many other Italian films from this moment in history, and investigates the
situation of Italian people locked in mortal conflicts on native soil. In this case, the setting is
a secluded Convent of Nuns, the inhabitants of which appear to have lived through the war
years relatively oblivious and unaffected by the events of the outside world. However, the
peace of the Convent is upset, when a group of Italian partisans led by Amedeo Nazzari
takes shelter on the grounds of the convent. The Germans are in close pursuit, and one of
the partisans is in dire need of medical attention. Elisa Cegani and Mariella Lotti are
featured in the cast of nuns, who decide to aid the wounded partisan, and slowly also come
to sympathize with the battle weary men. END_OF_DOCUMENT_TOKEN_TO_BE_REPLACED

Freely excerpted from Wikipedia:
In 1503, the French and the Spanish fight over the region surrounding the Sicilian castle of Morreale. Giovanna, the beautiful castellan, yearns to free herself from the foreign yoke and for this she wants to marry a brave knight. Graiano d’Asti deceives her by letting Ettore Fieramosca fight in his place and then bragging with Giovanna about the feat, thus managing to convince her to marry him. END_OF_DOCUMENT_TOKEN_TO_BE_REPLACED

The mood is set with the opening with excerpts from the Excelsior Ball, a famous ballet at the turn of the century that heralded the advances of the upcoming century, for a book-dealer to introduce the various stories in this compilation film. The first story chosen is (English titles) “Less Than a Day”, a comedy of would-be lovers meeting in a country-side rendezvous; “A Question of Property” is a story of two men who fight over the ownership of a load of manure; “The Idyll” is the story of a well-to-do young boy who has a crush on the girl next door, and he has been told by his mother that babies are born when two people kiss. END_OF_DOCUMENT_TOKEN_TO_BE_REPLACED

PLOT:
Maria and Paolo are in love, but they are very young, and most importantly Maria is the daughter of the municipal sweeper while Paolo is the son of lawyer Bonelli, deputy mayor and leader of the opposition.
To complicate matters there is the reconstruction of a hospice destroyed during the war. The reconstruction would obstruct the panorama enjoyable from the villa of Paseroni, big industrialist and political wheeler-dealer.
Bonelli, great speaker, becomes mayor for the death of his predecessor, and gets bribed by Paseroni, while refusing the love of Paolo and Maria for the social differences, and because Paolo should go after Paseroni’s daughter.
At this point, Paolo and Maria flee to kill themselves, just as Bonelli is about to give a speech on the radio for the inauguration of the villa of Paseroni… END_OF_DOCUMENT_TOKEN_TO_BE_REPLACED

IMDb:
An anticipation of Blasetti’s style. A great movie about the Siena Palio. Guido Celano (Zarre) is a very good actress and Leda Gloria too. The Tuscany environment is very well depicted. The performing style is influenced by the period, but it is quite good anyway. It is a very uncommon movie and the best representation of Palio, a religious and sporting event in Siena. Blasetti, then, after Il Palio and Terre Sole, start a wonderful career as director and will anticipates the “neorealism” with his 1942’s movie “Quattro passi fra le nuvole”. Very impressive the opening scene with Zarre riding a horse in the Siena countryside. END_OF_DOCUMENT_TOKEN_TO_BE_REPLACED

Quote:
Aldebaran is in some places erroneously reported as a “lost” film, but here it is! After
a couple of projects had either been postponed or fallen through for Blasetti, it was
suggested that he should make a film about the navy in peacetime. The result is this
strange film, which at the outset plays like a propaganda piece for the might of the Italian
navy, only to veer off into high melodrama, as it zeroes in on Commander Corrado Valeri
(Gino Cervi), and his conflict between duty and the jealousy of his wife. There are comedic
asides, a visit to a North African club, affording Blasetti to contribute the first scenes of
nudity in Italian film, and there are moments of heroics, including a mission to rescue the
doomed crew of a wrecked submarine. As if all of that was not more than enough, the film
features a star studded cast including Evi Maltagliati, Gianfranco Giachetti, Doris Duranti,
Elisa Cegani (in her debut), and even a brief cameo by Blasetti himself. END_OF_DOCUMENT_TOKEN_TO_BE_REPLACED 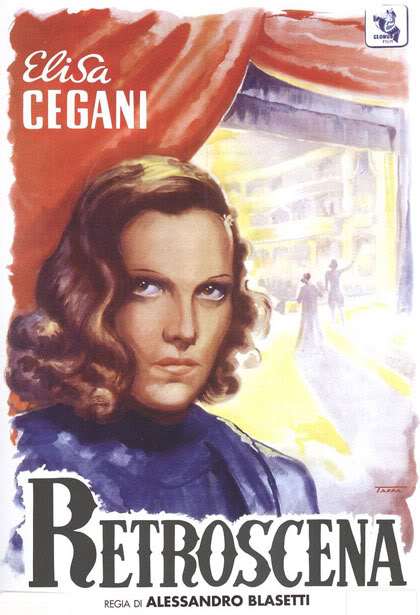