Swedish filmmaker Alf Sjöberg’s visually innovative, Cannes Grand Prix-winning adaptation of August Strindberg’s renowned 1888 play brings to scalding life the excoriating words of the stage’s preeminent surveyor of all things rotten in the state of male-female relations. Miss Julie vividly depicts the battle of the sexes and classes that ensues when a wealthy businessman’s daughter (Anita Björk, in a fiercely emotional performance) falls for her father’s bitter servant. Celebrated for its unique cinematic style (and censored upon its first release in the United States for its adult content), Sjöberg’s film was an important turning point in Scandinavian cinema. END_OF_DOCUMENT_TOKEN_TO_BE_REPLACED

The story about the thief who didn’t get crucified because Jesus was chosen to take his place.

This is the final cut, shown on Swedish TV for the very first time this Easter. END_OF_DOCUMENT_TOKEN_TO_BE_REPLACED

After failing to arrange a marriage with Elizabeth Tudor of England, king Erik XIV of Sweden needs a wife and children to secure his throne, fast. He falls in love with Karin Månsdotter, a very beautiful young girl, but of lowborn stock. The King’s secretary sees a chance to secure the good opinion of the populace, to act as a counterweight to the rich noblemen who always seek more influence. A marriage is made, but the king is not fully at his wits at a time when it is most needed… END_OF_DOCUMENT_TOKEN_TO_BE_REPLACED

Alf Sjöberg – Iris och löjtnantshjärta AKA Iris And The Lieutenant (1946) 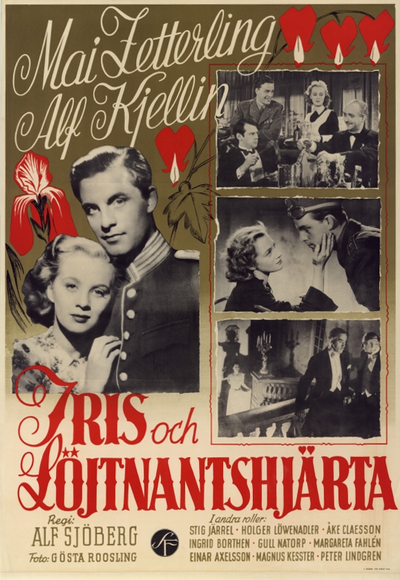 Handsome young cavalry officer Robert Motander is invited to a dinner with his decidedly rich family – makers of the classic Motander brand shoes. Amongst the booze and barbed exchanges with the siblings and in-laws, he can’t help but notice the beautiful and flirty young housemaid, Iris. Not shy of a trifle or two, he decides to go in for the kill.

And so begins a forbidden love story which the world will do anything to stop. END_OF_DOCUMENT_TOKEN_TO_BE_REPLACED

Statare, or country workers who recieved most of their payment in natura and didn’t own their own land, were the lowest of the low in Old Sweden. Maria – nicknamed ‘Rya-Rya’ – is born into this lot. A beautiful young woman, who the men tend to flock to, she quickly becomes with child. Her life changes forever…

Based on a novel by Ivar Lo Johansson. END_OF_DOCUMENT_TOKEN_TO_BE_REPLACED