Quote:
The opening scene is a single shot showing a family and their dog descending a hill, a large tree in the foreground, the distant countryside vanishing into the rolling fog. The camera pushes in imperceptibly, but continuously from the beginning. On the soundtrack, possibly diegetic, a sole woman sings. Meanwhile, the film credits scroll up over the scene. The family and dog, upon reaching the area in front of a hut, stop moving. Verdi’s Messa da Requiem fades in, overlapping for a brief moment with the woman singing. Once the foreground tree fully disappears, the scene freezes; the credits continue until the title appears, and the scene fades to black. The Requiem continues an audible transition to the second scene. END_OF_DOCUMENT_TOKEN_TO_BE_REPLACED

Quote:
Just like the Russian poet of the film 1983 ‘Nosthalgia’, who, accompanied by his Italian guide and translator, traveled through Italy researching the life of an 18th century Russian composer, Andrey Tarkovskiy, accompanied by his Italian scriptwriter, Tonino Guerra, travels through Italy in order to find the locations for their common filmed effort. During this journey, Guerra constantly induces Tarkovskyi to reflect on his work and on his past as a filmmaker and a poet. The result will be ‘Nostalghia’, a masterpiece END_OF_DOCUMENT_TOKEN_TO_BE_REPLACED 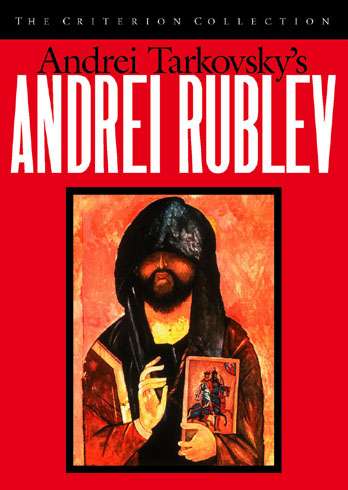 Commissioned to paint the interior of the Vladimir cathedral, Andrei Rublev (Anatoli Solonitsyn) leaves the Andronnikov monastery with an entourage of monks and assistants, witnessing in his travels the degradations befalling his fellow Russians, including pillage, oppression from tyrants and Mongols, torture, rape, and plague. Faced with the brutalities of the world outside the religious enclave, Rublev’s faith is shaken, prompting him to question the uses or even possibility of art in a degraded world. After Mongols sack the city of Vladimir, burning the very cathedral that he has been commissioned to paint, Rublev takes a vow of silence and withdraws completely, removing himself to the hermetic confines of the monastery. END_OF_DOCUMENT_TOKEN_TO_BE_REPLACED

Synopsis:
Seven year old Sasha practices violin every day to satisfy the ambition of his parents. Already withdrawn as a result of his routines, Sasha quickly regains confidence when he accidentally meets and befriends worker Sergei, who works on a steamroller in their upscale Moscow neighborhood. END_OF_DOCUMENT_TOKEN_TO_BE_REPLACED

The revelry is interrupted by a radio announcement: World War III has begun, and Mankind is only hours away from utter annihilation. Each of the guests reacts differently to the news: the most dramatic response is Alexander’s, who promises God that he’ll give up everything he holds dear – including his beloved 6-year-old son – if war is averted. Allan Edwall, a local mailman with purported mystical powers, offers to intervene with the Creator on Josephson’s behalf. END_OF_DOCUMENT_TOKEN_TO_BE_REPLACED

Synopsis
An expansive Russian drama, this film focuses on the life of revered religious icon painter Andrei Rublev. Drifting from place to place in a tumultuous era, the peace-seeking monk eventually gains a reputation for his art. But after Rublev witnesses a brutal battle and unintentionally becomes involved, he takes a vow of silence and spends time away from his work. As he begins to ease his troubled soul, he takes steps towards becoming a painter once again. END_OF_DOCUMENT_TOKEN_TO_BE_REPLACED