A scientist trying to better mankind nearly destroys the world as we know it in this sci-fi thriller. Dr. Stephen Sorensen (Dana Andrews) is doing research in geo-thermal energy; he’s convinced that if men can find a way to drill through the earth’s outer crust into the molten magma near the center, the heat can be harnessed and used to warm dwellings around the world. His assistant, Ted Rampion (Kieron Moore), is skeptical about this idea and believes that there could be dire consequences, but Sorensen boldly moves ahead with his plan, prodded by his secret knowledge that he suffers from a terminal illness and might not live long enough to undergo a longer testing period. However, Rampion’s fears soon prove well founded when Sorensen’s drilling causes a large crack in the earth which begins to rapidly expand, threatening to split the world in two with disastrous consequences. Crack in the World was praised on initial release for its intelligent approach and solid special effects work.
— Mark Deming (AllMovie) END_OF_DOCUMENT_TOKEN_TO_BE_REPLACED 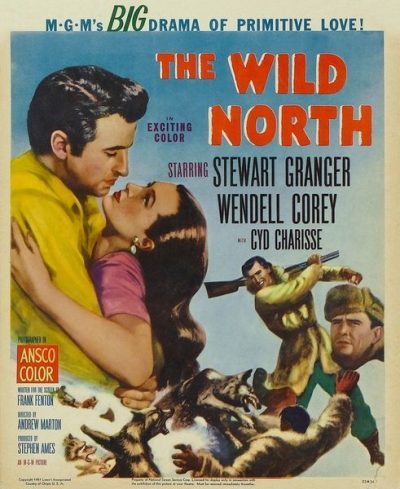 In 1952, many “outdoors” adventure films would be shot on the studio back-lot, with fake-looking backgrounds and interior sets masquerading as exteriors. The Wild North benefits greatly from the fact that much of it was shot on authentic locations (the American state of Idaho standing in for northern Canada). The film also benefits from a clutch of strong leading performances from Stewart Granger and Wendell Corey, plus the ravishing Cyd Charisse (cast – some might say miscast – as a native Indian). The whole film is smartly presented by Andrew Marton, whose last film prior to this was another outdoor adventure with Stewart Granger, the 1950 version of King Solomon’s Mines. END_OF_DOCUMENT_TOKEN_TO_BE_REPLACED