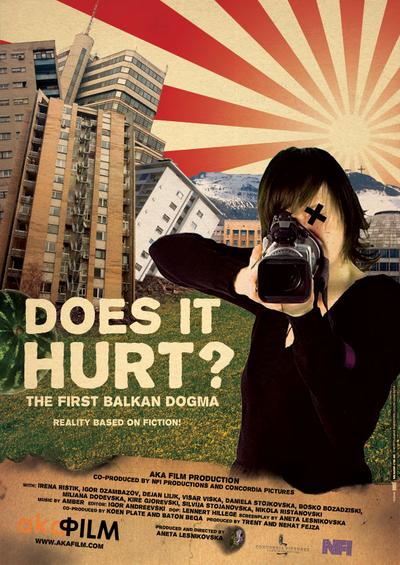 The Dogma 95 film movement appeared out of the need to make low budget films that will be concentrated on the storytelling and the acting. No long preparations, no stylish million-dollar bullshitting. Just film. For many years most of the filmmakers in the Balkan have been doing exactly the same. It is just that they haven’t made a manifesto and most of them have never even heard of Dogma 95. Does it hurt? The First Balkan Dogma is a no budget mockumentary shot on HDV according to the dogma rules.

Synopsis:
A Macedonian filmmaker wants to make the first official Balkan Dogma film in Macedonia. She lies to her friends that she got financial support from the Zentropa producers. The film starts from the moment that she gathers her closest friends and asks them to join her in the quest for finding the right story for the film. She has decided to film the whole process from the very beginning and use it later for the making off. Following the four characters in their quest we discover Macedonia and the Balkans in 2006. The camera captures visual sequences of the absurdity, humour and survival techniques of a land and people in transition. The making of project ultimately becomes the true subject of the film. END_OF_DOCUMENT_TOKEN_TO_BE_REPLACED