Annemarie Jacir – Lamma shoftak AKA When I Saw You (2012) 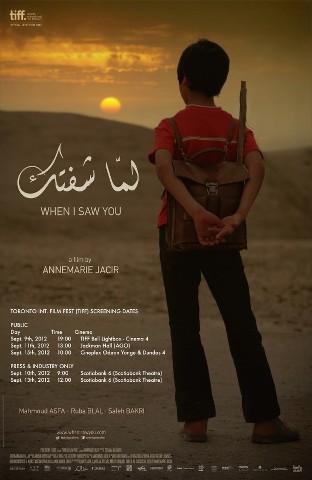 Synopsis
The follow up to Annemarie Jacir’s award-winning feature debut Salt of the Sea, When I Saw You tells the tale of a young Palestinian boy and his mother as they struggle to maintain their dignity after being displaced from their West Bank by the Israeli army in 1967. Defeated by the Israelis for the second time in their quest to liberate Palestine, numerous Palestinians and their families join refugees from the 1948 conflict in refugee camps located in nearby Arab countries. 11-year-old Tarek (Mahmoud Asfa) and his mother Ghaydaa (Ruba Blal) are just two of the thousands who were displaced when the Israeli army seized control of the West Bank and Gaza Strip. Desperate, they seek shelter at the Harir Camp in Jordan while anxiously awaiting the return of Tarik’s father, Ghassan. Later, when Ghassan fails to appear, Tarik grows emboldened by his encounter with a band of heavily-armed Palestinian freedom fighters, and decides to join their ranks.
Jason Buchanan, allmovie END_OF_DOCUMENT_TOKEN_TO_BE_REPLACED