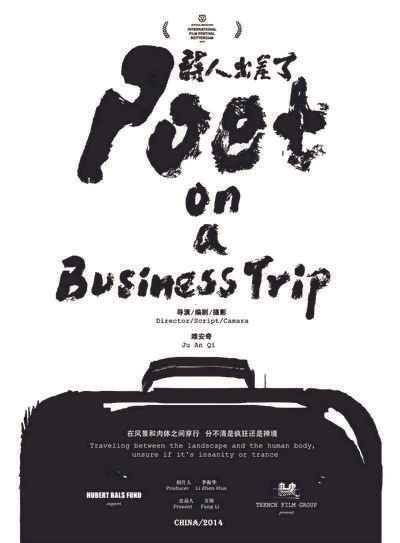 Quote:
In all its simplicity, a completely unique film, shot more than 10 years ago and only now edited. A poet sets off on a ‘business trip’ through inhospitable Xinjiang. The physically exhausting trip provides an existential brothel visit, bumping on bad roads and a glimpse of a disappearing world, but also 16 melancholy poems.

In 2002, Ju Anqi made a film about a tour by the poet Shu through Xinjiang, the most western-lying, autonomous Uyghur province of China. All that we know about Shu is that he plays a poet who sends himself on a business trip – an absurd, satirical starting point that sets the tone for the film.
For a variety of reasons, it was not until 2013 that Ju started editing the rough, lyrical material that he had shot in what is now a very restless Xinjiang: it’s like an excellent wine that has had time to mature. Structured around 16 poems which he wrote on the road, Shu’s physically exhausting journey takes him along endless rocky roads, passing shabby inns and through impressive landscapes from one prostitute to the next.
In its documentary authenticity, Poet on a Business Trip is also an historic document that exudes an atmosphere of loss, providing an unsentimental yet melancholy glimpse of a country in transition and a mirror for the existential irreversibility of time. END_OF_DOCUMENT_TOKEN_TO_BE_REPLACED