Quote:
A trapper and his two partners work as scouts for a remote army fort where they witness an incompetent colonel’s decision to throw his small unprepared garrison against Red Cloud’s sizable Sioux force. END_OF_DOCUMENT_TOKEN_TO_BE_REPLACED

Quote:
A research scientist conducting experiments on a new anaesthetic finds herself being blackmailed by a women she accidentally knocked down with her car; the woman wasn’t hurt, but a scheming attorney has convinced her she can get a lot of money for the “accident.” Meanwhile, the scientist’s research assistant, who is in love with her boss’ boyfriend, arranges for an explosion in the laboratory that disfigures the scientist’s face, in order to take the boyfriend away from her. The scientist has plastic surgery to make her look like the woman who tried to blackmail her – who while struggling with the scientist fell out of a window and was killed – and determines to get back her boyfriend and punish her scheming assistant. END_OF_DOCUMENT_TOKEN_TO_BE_REPLACED

An ex-pilot and current baseballer is recalled into the U.S. Air Force and assumes an increasingly important role in Cold War deterrence. END_OF_DOCUMENT_TOKEN_TO_BE_REPLACED

Quote:
After the Civil War, a highly decorated Shoshone Indian veteran plans to raise cattle in Wyoming but white farmers plan to grab fertile tribal lands by pitting the whites against the Indians. END_OF_DOCUMENT_TOKEN_TO_BE_REPLACED

Quote:In 1946, ex-Navy engineer Steve Martin comes to a Louisiana town with a dream: to build a safe platform for offshore oil drilling. Having finessed financing from a big oil company, formerly penniless Steve and his partner Johnny are in business…and getting interested in shrimp-boat captain Rigaud’s two lovely daughters. But opposition from the fishing community grows fast, led by Stella Rigaud. END_OF_DOCUMENT_TOKEN_TO_BE_REPLACED

Paul Tatara, TCM wrote:
Some movie projects, no matter how promising, seem doomed to one form of failure or another. When RKO first filmed Edna Ferber’s popular Western novel, Cimarron, in 1931, it was a major critical success, and even snagged the Oscar® for Best Picture. But it was an expensive movie to make, and the studio lost a pile of money on it. Then, when MGM enlisted Anthony Mann to remake Cimarron in 1960, the production was beset with an assortment of problems, including studio interference and a misbegotten romance between its lead performers, Glenn Ford and Maria Schell. END_OF_DOCUMENT_TOKEN_TO_BE_REPLACED 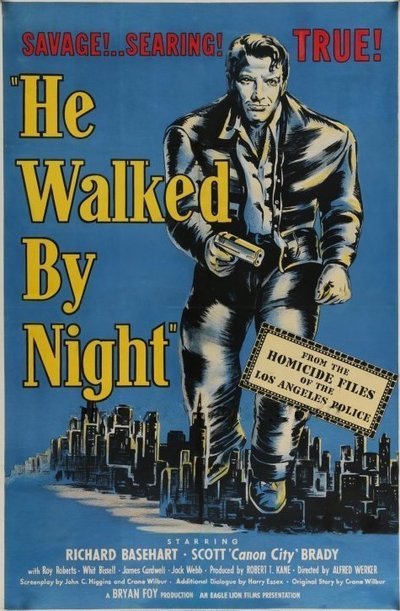 Quote:
Taken from actual case files, He Walked By Night is the suspenseful, action-packed tale of a manhunt for the most cunning criminal in the history of the LAPD. With a combination of ingenuity, state of the art technology, sweat and sheer determination, the police painstakingly track down a brilliant, elusive thief and cop killer who seems to have the ability to vanish into thin air. But can they catch him before he murders again? END_OF_DOCUMENT_TOKEN_TO_BE_REPLACED