To get quickly to the point, Four Friends is the best film yet made about the sixties, that harrowed time of war, prosperity, and broken promises, of turning on and dropping out to colors described as psychedelic, when establishment came to be written with a capital “E.”
Four Friends, directed by Arthur Penn and written by Steven Tesich, initially suggests a sort of big-budget The Return of the Secaucus Seven. It’s a film that embraces the looks, sounds, speech, and public events of the sixties, but not in the way of a documentary. It has the quality of legend, a fable remembered. Because Mr. Penn and Mr. Tesich see everything in terms of legend, even a tumultuously funny barroom brawl near the film’s end becomes not only a brawl but also a revivifying re-creation of all barroom brawls in all of the Western films the four friends grew up with. END_OF_DOCUMENT_TOKEN_TO_BE_REPLACED

Synopsis:
When vigilante land baron David Braxton (John McLiam) hangs one of the best friends of cattle rustler Tom Logan (Jack Nicholson), Logan’s gang decides to get even by purchasing a small farm next to Braxton’s ranch. From there the rustlers begin stealing horses, using the farm as a front for their operation. Determined to stop the thefts at any cost, Braxton retains the services of eccentric sharpshooter Robert E. Lee Clayton (Marlon Brando), who begins ruthlessly taking down Logan’s gang. END_OF_DOCUMENT_TOKEN_TO_BE_REPLACED

Quote:
Preceding Bonnie and Clyde by a year, Arthur Penn’s (Mickey One) acclaimed film boasts enviable pedigree – produced by the legendary Sam Spiegel, with a screenplay by Lillian Hellman from the novel by Horton Foote, a rousing score by John Barry, and a stellar cast of the hottest stars of the day (including Marlon Brando, Jane Fonda, Robert Redford, Angie Dickinson and James Fox). The story of an escaped con making his way back to the corrupt Texas town and the people who sent him to prison, The Chase is a telling indictment of violence in American society. A seminal work which is ripe for rediscovery. END_OF_DOCUMENT_TOKEN_TO_BE_REPLACED

Synopsis:
1934. Young adults Bonnie Parker, a waitress, and Clyde Barrow, a criminal just released from prison, are immediately attracted to what the other represents for their life when they meet by chance in West Dallas, Texas. Bonnie is fascinated with Clyde’s criminal past, and his matter-of-factness and bravado in talking about it. Clyde sees in Bonnie someone sympatico to his goals in life. Although attracted to each other physically, a sexual relationship between the two has a few obstacles to happen. END_OF_DOCUMENT_TOKEN_TO_BE_REPLACED

Synopsis:
Young Helen Keller, blind, deaf, and mute since infancy, is in danger of being sent to an institution. Her inability to communicate has left her frustrated and violent. In desperation, her parents seek help from the Perkins Institute, which sends them a “half-blind Yankee schoolgirl” named Annie Sullivan to tutor their daughter. Through persistence and love, and sheer stubbornness, Annie breaks through Helen’s walls of silence and darkness and teaches her to communicate. END_OF_DOCUMENT_TOKEN_TO_BE_REPLACED

In 1944, a German colonel loads a train with French art treasures to send to Germany. The Resistance must stop it without damaging the cargo. END_OF_DOCUMENT_TOKEN_TO_BE_REPLACED 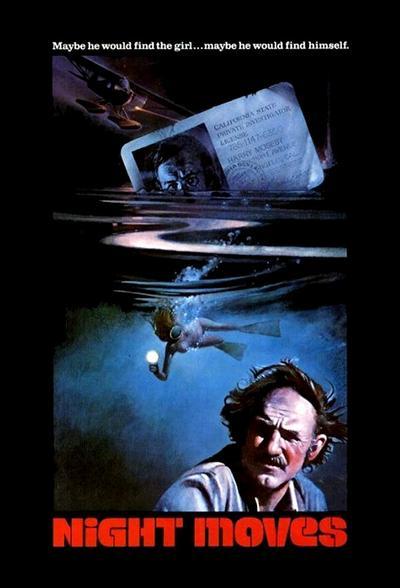 Synopsis wrote:
When Los Angeles private detective, Harry Moseby is hired by a client to find her runaway teenage daughter, he stumbles upon a case of murder and artifact smuggling.

Vincent Canby wrote:
Arthur Penn’s Night Moves, the director’s first film since the epic Little Big Man five years ago, is an elegant conundrum, a private-eye film that has its full share of duplicity, violence, and bizarre revelation, but whose mind keeps straying from questions of pure narrative to those of the hero’s psyche. END_OF_DOCUMENT_TOKEN_TO_BE_REPLACED