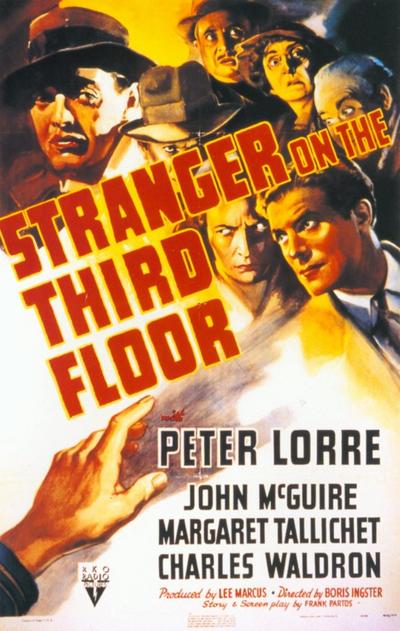 Plot Synopsis: Though he doesn’t speak his first line of dialogue until the film’s final ten minutes, Peter Lorre spiritually dominates the fascinating RKO melodrama Stranger on the Third Floor. The plotline is carried by John McGuire, playing Ward, a newspaper reporter whose courtroom testimony sends the hapless Briggs (Elisha Cook Jr). to the death house. Ward is certain that he saw Briggs leaving the scene of a murder, but as the days pass, he is tortured by guilt and doubt — especially during the film’s surrealistic knockout of a nightmare sequence. When another murder is committed, Ward finds himself as much a victim of circumstantial evidence as the unfortunate Briggs. The reporter’s girlfriend (Margaret Tallichet) tries to clear Ward….and that’s when she first makes the acquaintance of Lorre, who is heard ordering a pound of raw meat! Stranger on the Third Floor was a “film noir” long prior to the genesis of that cinematic movement. Long ignored or trivialized by film historians, this 7-reel quickie has in recent years graduated to classic status.
— Hal Erickson, AMG END_OF_DOCUMENT_TOKEN_TO_BE_REPLACED