A montage of images of film making is followed by a silent western story. END_OF_DOCUMENT_TOKEN_TO_BE_REPLACED

Inspired by a lesson from Erik Satie; a film in the form of a street – Castro Street running by the Standard Oil Refinery in Richmond, California … switch engines on one side and refinery tanks, stacks and buildings on the other – the street and film, ending at a red lumber company. All visual and sound elements from the street, progressing from the beginning to the end of the street, one side is black-and-white (secondary), and one side is colour – like male and female elements. The emergence of a long switch-engine shot (black-and-white solo) is to the filmmaker the essential of consciousness. END_OF_DOCUMENT_TOKEN_TO_BE_REPLACED

Quote:
Mass for the Dakota Sioux (1964, 20 minutes, 16mm) is dedicated by Baillie to “the religious people who were destroyed by the civilization which evolved the Mass.” It is on one level a “Mass” for the American Indian conquered and displaced by the white American in quest of manifest destiny. A quote from the native American Sitting Bull opens the film,

But this conflict of American history is also an echo of the artist’s own dilemma. Like the Beat Generation poets and writers, Baillie is situated outside the mainstream. He is an outsider looking in. His vision, personal, perceptive, unique and unmitigated by the profit motive defines the role of the contemporary artist. END_OF_DOCUMENT_TOKEN_TO_BE_REPLACED

Quote:
An early film made for an Oakland school for mentally disturbed children.

Quote:
From the 1910s through the 1950s newsreels were a staple of American
Moviegoing experience. Released nationally to theaters once or twice a week and running about 10 min., newsreels highlighted the events of the day – politics,sports,
scandals, ceremonies – and generally included at least one human-interest story.
Sometimes local theaters made their own, thrilling audiences by profiling hometown
personalities. With Here I Am Bruce Baillie brings this inclusive approach
to the avant-garde. END_OF_DOCUMENT_TOKEN_TO_BE_REPLACED

“He who becomes slowly wise.”

SPOILER.
The Structure of Lyric:
Baillie’s to Parsifal
Alan Williams

It’s difficult to say exactly where or how To Parsifal is a lyric film and where or how a narrative work. For this reason, ordinary critical vocabularies (based on certain “types” of films) do not apply with much usefulness to Bruce Baillie’s abstractly assembled color images, nor to the nature and functions of his sound track. To get a sense of how this film works it will be necessary first to break it down, outline it, in order to see how the (implied) viewer puts it together. END_OF_DOCUMENT_TOKEN_TO_BE_REPLACED 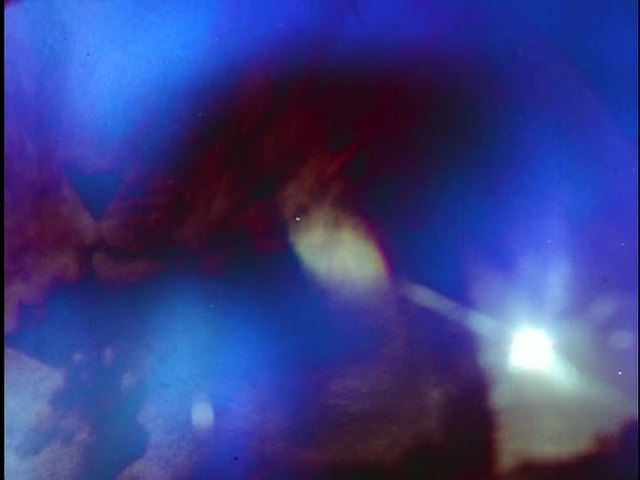 The experience of transformation between life and death, death and birth, or rebirth in four reels.

Interview With Baillie by Brecht Andersch:

BB: I caught hepatitis almost a year before I started working on Quick Billy. I got the hepatitis at the ranch, then I retired to Berkeley with my parents to lie on the floor next to the couch for the next nine months. It was a real knockout. It was kind of a question of whether I could live or not. Several of my friends had died of it. It wasn’t serum hepatitis, but it was a very serious case that some of us had. And after three or four months, I started to try to walk around a little, and then started to try to drive. That’s how I found myself up at Fort Bragg, where most of my friends lived … I started (shooting) about nine months after the onset of the disease, and a friend let me stay in his cabin on the beach. That was a lifesaver. END_OF_DOCUMENT_TOKEN_TO_BE_REPLACED