Synopsis:
The Man From the Alamo manages to pack a few nuances and surprises in its traditional western plotline. During the siege at the Alamo, John Stroud (Glenn Ford) is chosen by lot to leave the fort and warn the families of the mission’s defenders of the impending arrival of General Santa Ana. But when everyone around him is wiped out by the Mexicans, Stroud has no proof that he was ordered to leave his post, and is therefore branded a coward. He spends the rest of the film performing acts of conspicuous bravery to clear his name–and also tracks down the film’s real villain, Jess Wade (Victor Jory), who robbed the Alamo victims of their possessions after the smoke cleared. Julie Adams, Chill Wills, Hugh O’Brien, Neville Brand, Arthur Space and future soap-opera star Jeanne Cooper round out the cast. — Hal Erickson END_OF_DOCUMENT_TOKEN_TO_BE_REPLACED

A man saves a woman who had been kidnapped by Comanches, then struggles to get both of them home alive. END_OF_DOCUMENT_TOKEN_TO_BE_REPLACED

Obscure Hollywood writes:
Kathy Lawrence (Bremer), a reporter, has evidence that fugitive judge Finlay Drake (Hayes) is hiding in La Siesta Sanitarium. She hires private investigator Ross Stewart (Carlson) to pose as her mentally unbalanced husband and enter the sanitarium to search for Drake. Kathy gives Ross a picture of the judge. If he finds the fugitive, she will have an important story, and they can split the $10,000 reward offered for Drake’s capture. END_OF_DOCUMENT_TOKEN_TO_BE_REPLACED

Synopsis
A gunman seeks revenge on the man he believes stole his wife. END_OF_DOCUMENT_TOKEN_TO_BE_REPLACED 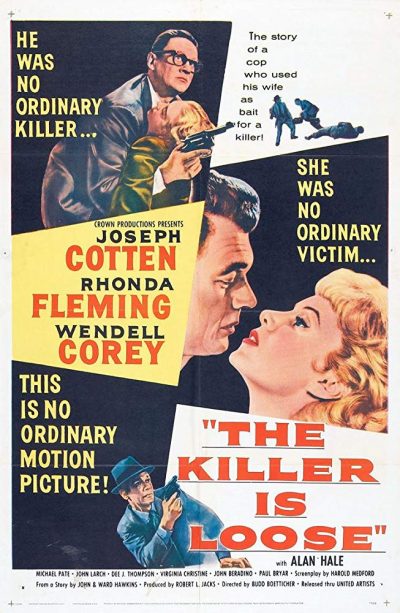 Plot:
A bank robber’s (Wendell Corey) wife is shot during his arrest by a cop (Joseph Cotten). He escapes to kill the cop’s wife (Rhonda Fleming) as retribution. Despite the cop’s protest, the police decide to use Fleming as a lure. From Warner Brothers Website! END_OF_DOCUMENT_TOKEN_TO_BE_REPLACED 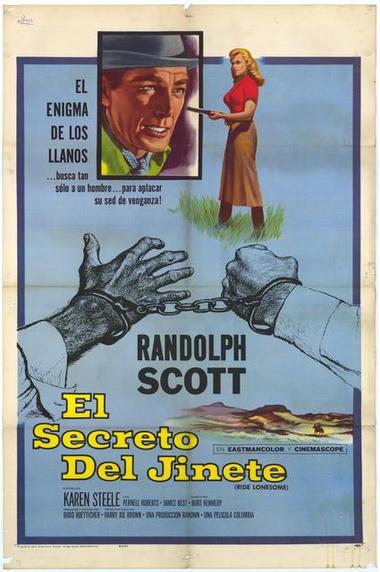 A wanted murderer, Billy John, is captured by Ben Brigade, a bounty hunter, who intends to take him to Santa Cruz to be hanged. Brigade stops at a staging post, where he saves the manager’s wife from an Indian attack, and enlists the help of two outlaws to continue his journey more safely. However, the Indian attacks persist, the outlaws plan to take Billy for themselves, tempted by the offer of amnesty for his captor, and Billy’s brother Frank is in hot pursuit to rescue him. But Brigade has plans of his own. END_OF_DOCUMENT_TOKEN_TO_BE_REPLACED 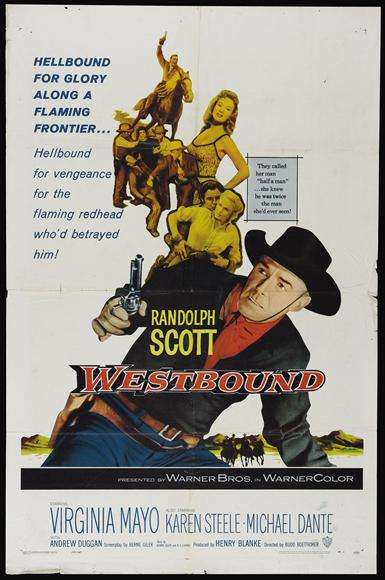 A fast-paced western with a romantic twist, this was one of the last films pairing director Budd Boetticher and popular cowboy hero Randolph Scott before Scott’s retirement. John Hayes – Scott – left the Civil War behind him when he took on the job of managing the Overland Stage Lines out of a small Colorado town. Clay Putnam has not forgotten that the Confederacy lost and he plans on robbing Hayes Overland Stage of one of its gold shipments from California to the North. He wants the gold to stay in the South to revive the Confederate cause. Meanwhile, his wife Norma -Virginia Mayo – complicates matters since she was Hayes’ old flame, and Putnam’s cronies want the gold for themselves. END_OF_DOCUMENT_TOKEN_TO_BE_REPLACED