Quote:
Review (Popeye Pete, The Deuce: Grindhouse Cinema Database)
Director/Producer Perry Henzell created one of the most popular films to come out of Jamaica. The Harder They Come was a triumph for the Jamaican culture and it gave an honest look at life within the ghettos of that part of the world. It also became a legendary cult film. Ivan (Jimmy Cliff) is a country boy looking for fame and fortune in the big city of Kingston, Jamaica. He has dreams of becoming a star in the new reggae scene. When Ivan gets to town, he finds out things wont be as easy as he expected. When Ivan visits his mother and she explains that even though he has good intentions hes headed for a rough road ahead. END_OF_DOCUMENT_TOKEN_TO_BE_REPLACED

One of Hondo’s enduring masterpieces, West Indies is a stunning widescreen musical that takes place entirely on a single set – a giant slave ship that symbolizes the triangular relationship between Africa, Europe and the Caribbean – as it explores the parallels between the forced migration of the Atlantic slave trade and the contemporary migration of Afro-Caribbean subjects to former colonial metropoles. In a breathtaking display of virtuosity, Hondo deftly uses an array of filmic techniques (a vertically oriented mise en scène, dexterous tracking shots, beautifully orchestrated long takes) to explore four centuries of history within his single location, signalling temporal shifts through fluid camera movements and sumptuous staging; meanwhile, the remarkable range of musical styles, witty, poignant, and rousing lyrics, and brilliant choreography dazzle the senses and invite the spectator to join in the struggle to transform the world. –Aboubakar Sanogo END_OF_DOCUMENT_TOKEN_TO_BE_REPLACED

Set in Brooklyn, New York this Dutch film is based on a true story that appeared on a New York newspaper in 1980. Desirée lives in the past. A series of flashbacks expose us to her psychologically troubled childhood very much affected by a promiscous mother. Her present life evolves around three people: her employer Mrs. Resnick, Freddy, her lover and Father Siego, leader of the church “The True Confessors”. Desirée’s relationship with each one of these characters is at the origin of her falling apart. Freddy is an insecure black man who finishes their love affair with a sad note, Father Siego is the leader of a rigid narrow-minded religious sect and Mrs Resnick is a racist, prejudiced white woman who feels black people are inferior and incapable of living their own live. Rejected by all because of her pregnancy, Desirée blames her child as the source of evil. She is then possessed by evil and wants to exorcise it. The only way is to get rid of her daughter… END_OF_DOCUMENT_TOKEN_TO_BE_REPLACED

In a fortress perched on the top of a mountain, a “democratically elected” President and his closest collaborators are getting ready for a state celebration. Foreign chiefs of state and dignitaries of all sorts are expected. But in the morning of the event, he wakes up to find the country inflamed the streets in turmoil. As the day goes on, rebellion worsens. Meanwhile, expected guests are withdrawing from the party one after another… Despite the situation, the President does not want to face reality and refuses to resign. Overwhelmed, he plunges into a deep mental confusion as the events follow their course. END_OF_DOCUMENT_TOKEN_TO_BE_REPLACED

Synopsis:
In this documentary on the Rastafarians in Jamaica (homeland of the Rastafari par excellence — the late Bob Marley), director Alan Greenberg interviews some Jamaicans whose conversations suggest that the smoking of ganja, the worship of Haile Selassie (the former Ethiopian emperor) as a god, and the goal of Jamaican self-realization is their own kind of unified field theory. A young, poverty-stricken teenager listens to the reggae music on his radio as though it will magically lead him to a better future, and a pineapple cutter living in the “baddest” area of the island dreams of fomenting tourism in his exotic surroundings. The May, 1981 funeral of Marley himself brought Christian and Rastafarian beliefs together in tribute to the island’s hero, providing one of the most poignant vignettes in the Land of Look Behind. END_OF_DOCUMENT_TOKEN_TO_BE_REPLACED

A fascinating documentary from Trinidad and Tobago about the domination of Caribbean television by programs from the North, primarily the US. This film ambitiously weaves together interviews, indigenous poetry and music with clips from imported French and US television programs to show how Caribbean viewers receive a distorted view of the world that alienates them from their own cultural heritage. Also included is a glimpse of how Cuba has tackled the problem and the US response in the form of Radio Marti. END_OF_DOCUMENT_TOKEN_TO_BE_REPLACED 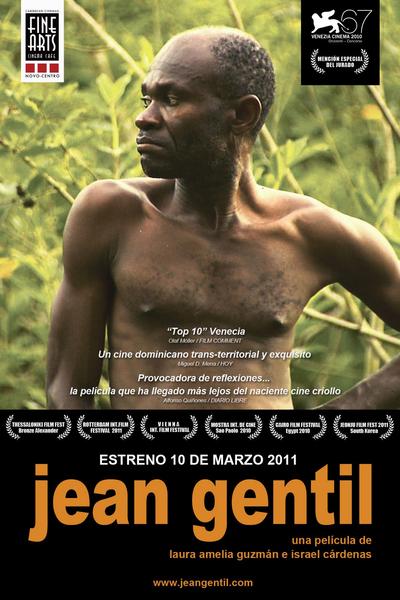 Quote:
In Jean Gentil, a man looks for a job in a cacophonous city that wouldn’t notice if he had never existed. He’s wearing a tie and the kind of sadness that removes from the face any immediately recognizable expression—the awkward and self-effacing sadness of the unwelcome immigrant. The man (Jean Gentil, playing a filmic version of himself) is an unemployed Haitian polyglot in Santo Domingo with a background in accounting and a tendency to question whether or not he’s even alive. While initially aiming for an office job in line with his experience and goals, he quickly has to settle for a construction job and a hard floor to sleep on after being evicted. He eventually makes his way to the countryside, where he retreats from the unforgiving madness of the big city and, ironically, away from “civilization” he can finally find a place to sleep, something to eat, and water to bathe.
source: link END_OF_DOCUMENT_TOKEN_TO_BE_REPLACED