Shown in reverse chronological order, Peppermint Candy is the tale of a solitary man’s painful growth in life set against the back drop of nearly three decades of Korean history. A distraught and weathered man, Yong-ho stands on the rails of a train track staring oncoming death in the face. Through divided sequences we retrace the steps that brought him to this place and this state of mind. From his failed marriage and unsuccessful career, to his first love and his traumatizing experience in the army, we are shown all of the elements that went into the psychological demise of a broken man. END_OF_DOCUMENT_TOKEN_TO_BE_REPLACED

Mija lives with her middle-schooler grandson in a small suburban city located along the Han River. She is a dandy old lady who likes to dress up in flower-decorated hats and fashionable outfits, but she is also an unpredictable character with an inquisitive mind. By chance she takes a poetry class at a neighborhood cultural center and is challenged to write a poem for the first time in her life. Her quest for poetic inspiration begins with observing the everyday life she never intentional took notice of before to find beauty within it. And with this, Mija is delightfully surprised with newfound trepidation as if she were a little girl discovering things for the first time in her life. But when she is suddenly faced with a reality harsh beyond her imagination, she realises perhaps life is not as beautiful as she had thought it is… END_OF_DOCUMENT_TOKEN_TO_BE_REPLACED Deliveryman Jongsu is out on a job when he runs into Haemi, a girl who once lived in his neighborhood. She asks if he’d mind looking after her cat while she’s away on a trip to Africa. On her return she introduces to Jongsu an enigmatic young man named Ben, who she met during her trip. And one day Ben tells Jongsu about his most unusual hobby… END_OF_DOCUMENT_TOKEN_TO_BE_REPLACED 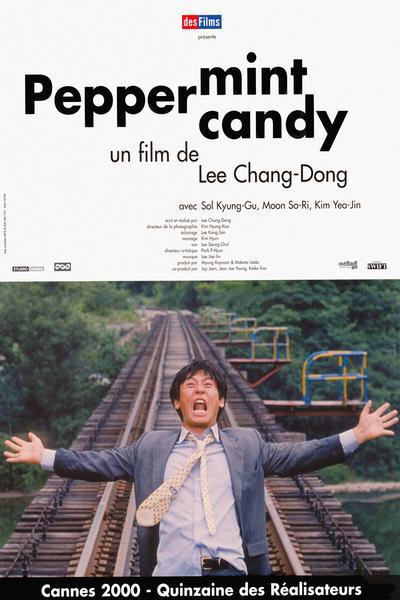 Quote:
Screenwriter turned director Lee Chang-dong, who scripted the acclaimed A Single Spark, creates this tale of personal evolution and national history. Told backwards, the film opens in the spring of 1999 where a family outing is spoiled by a raggedy old man, Yeong-ho, who threatens to throw himself in front of a train. Rewind to three days earlier, Yeong-ho is seen buying a gun to off himself. Recently ruined by bad stock deals, terrorized by loan sharks, and dumped by his adulterous wife, Yeong-ho is a typical victim of the Asian financial meltdown. He pays his dying ex-girlfriend a visit in the hospital and, though she is unconscious, he gives her the same peppermint candy that she used to send him. Rewind further to the summer of 1994, Yeong-ho hires a detective to tail his philandering wife, though he is involved with a pretty office assistant. Rewind to 1987, which reveals Heong-ho as a thuggish policeman known for dispensing horrific amounts of brutality. This film was a critical favorite at the 1999 Pusan Film Festival. END_OF_DOCUMENT_TOKEN_TO_BE_REPLACED