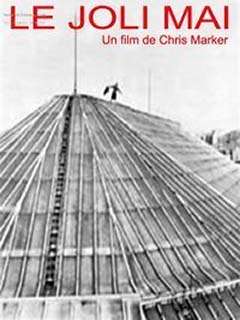 Setting out to create an evocative portrait of his beloved hometown of Paris and to “track it like a detective with a telescope and a microphone,” Chris Marker’s astounding and astute film LE JOLI MAI emerges as an early example of Marker’s unique cinema of poetic cultural anthropology. Filmed in May 1962, just as the Algerian war had come to an end, LE JOLI MAI sees a crew of interviewers and cameramen fanning out across Paris interviewing a compelling cross section of city dwellers on life, love, money, happiness, work, war, and peace. From a poverty stricken mother of seven who just received a government-financed flat, to outspoken teenage students at the stock exchange, Marker’s interviewees respond to his deceptively simple questions with statements that encapsulate the complex, troubled, and exciting society of 1962 Paris during a period of psychological and social turmoil. Marker’s highly subjective documentary style matches eloquent narration with illustrative montage. The film’s visual and verbal wit matches the stark reality of its documentary footage with philosophical musings (voiced beautifully by narrator Simone Signoret). LE JOLI MAI faithfully captures Marker’s sociopolitical vision of Paris, and it foreshadows the unrest that would erupt less than a decade later in the revolts of May 1968. END_OF_DOCUMENT_TOKEN_TO_BE_REPLACED