Synopsis:
As the film opens on an Oklahoma farm during the depression, two simultaneous visitors literally hit the Wagoneer home: a ruinous dust storm and a convertible crazily driven by Red, the missus’ brother. A roguish country-western musician, he has just been invited to audition for the Grand Ole Opry, his chance of a lifetime to become a success. However, this is way back in Nashville, Red clearly drives terribly, and he’s broke and sick with tuberculosis to boot. Whit, 14, seeing his own chance of a lifetime to avoid “growing up to be a cotton picker all my life,” begs Ma to let him go with Uncle Red as driver and protege. Thus begins a picaresque journey both hilarious and poignant.
— IMDB. END_OF_DOCUMENT_TOKEN_TO_BE_REPLACED

Quote:
A Stranger rides into in the dusty mining town of Lago, where the townspeople are living in the shadow of a dark secret. After a shootout leaves the town’s hired-gun protectors dead, the town’s leaders petition the Stranger to stay and protect them from three ruthless outlaws who are soon to be released from prison. The three have their sights set on returning to Lago to wreak havoc and take care of some unfinished business. A series of events soon has the townspeople questioning whether siding with the Stranger was a wise idea as they quickly learn the price that they each must pay for his services. As the outlaws make their way back into Lago, they discover that the town is not exactly as they had left it, and waiting in the shadows is the Stranger, ready to expose the town’s secret and serve up his own brand of justice. END_OF_DOCUMENT_TOKEN_TO_BE_REPLACED 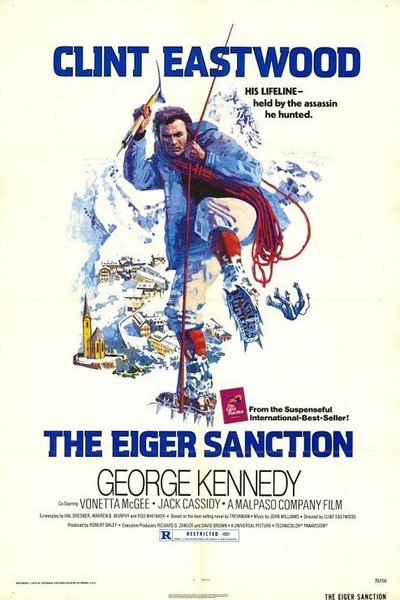 Quote:
Dr. Jonathan Hemlock (Clint Eastwood) is an art history professor and collector who finances his hobby by performing the odd sanction (assassination) for an obscure government bureau. He is forced to take a case where he must find out which of the members of a mountain climbing team is the Russian killer he has been given as a target by joining an expedition to climb the treacherous Eiger. END_OF_DOCUMENT_TOKEN_TO_BE_REPLACED

Synopsis:
Disc jockey Dave Garver (Clint Eastwood) attracts the amorous attentions of a demented fan named Evelyn Draper (Jessica Walter). Evelyn lets Dave pick her up at a bar. Later at her apartment, Evelyn admits that she is the cooing caller who repeatedly asks Dave to play the Erroll Garner classic “Misty”. From then on, this movie is a lesson in how one casual date can turn your whole life around. Evelyn stalks Dave everywhere, ruins his business lunch, assaults his maid, mutilates his house and all of his belongings, and finally threatens to butcher his girlfriend Tobie Williams (Donna Mills). You’ll never be able to hear that song again without looking over your shoulder. END_OF_DOCUMENT_TOKEN_TO_BE_REPLACED

Synopsis :
A Missouri farmer joins a Confederate guerilla unit and winds up on the run from the Union soldiers who murdered his family. END_OF_DOCUMENT_TOKEN_TO_BE_REPLACED

Quote:
Clint Eastwood returns to his popular Dirty Harry character and directs himself in the role for the first time. The film starts with Harry leaving San Francisco at his superiors’ insistence and going to a small seaside town for a little peace and quiet. There he becomes embroiled in a series of brutal murders committed by a young artist, Jennifer Spencer (Sondra Locke). She and her sister were raped by a group of local men, including the police chief’s son, a few years back. The experience left Jennifer’s sister completely catatonic, and Jennifer herself is tormented by flashbacks. While Harry investigates the killings, he falls in love with Jennifer, not knowing that she is committing the murders. Sudden Impact is a disturbing film in which Eastwood examines the darker aspects of Dirty Harry and comes up with a brooding, grim drama that has a hauntingly ambiguous ending. END_OF_DOCUMENT_TOKEN_TO_BE_REPLACED

Eastwood directs and stars as Bronco Billy in this sweet comedy about the cowboy who heads up a seedy Wild West show and the stranded Park Avenue heiress he rescues. The Wild West has been tamed, leaving no place for a group of romantic roustabouts except their small traveling show. Meanwhile a desperate heiress (Sondra Locke), who has been left stranded by her con-artist husband, will do anything for a ride to the next town—even if that means allowing a blindfolded Bronco Billy to throw knives at her for a scant audience. So begins a tumultuous relationship and roller coaster adventure. END_OF_DOCUMENT_TOKEN_TO_BE_REPLACED