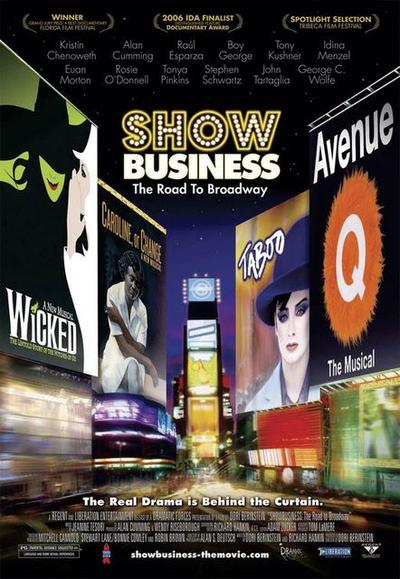 The playful but intense and vastly informative Show Business: The Road to Broadway is a documentary about four musicals that were contenders for top Tony Awards prizes in the 2004 Broadway season. Following the parallel action between the quartet–“Wicked,” “Avenue Q,” “Taboo,” and “Caroline, or Change”–from concept through casting, rewrites, rehearsals, opening nights and the relative box-office fortunes of each, the film dazzles a viewer by seeming to be everywhere at once. Along the way, one encounters cascades of neuroses and anxieties from the creative community involved in these shows, but there is also tremendous insight shared by the various playwrights, composers, lyricists, producers, directors, and stars who get these productions up and running. There’s sundry drama, too, especially concerning the brief run of “Taboo,” the financially disastrous musical about Boy George that was largely bankrolled by Rosie O’Donnell and ran into a variety of problems. Excellent fly-on-the-wall moments include a dinner sequence involving a handful of well-known theatre critics, whose tastes vary and who often champion shows no one else seems to like. Everything leads to highlights from the 2004 Tony Awards show, which was full of surprises. A final sequence in which one catches up with the many talents involved says everything about how success and failure is often a mere roll of the cosmic dice.
END_OF_DOCUMENT_TOKEN_TO_BE_REPLACED