PLOT DESCRIPTION
Paul (Dominic Guard) is a journalist who is up to date on the latest horrors of the modern world and is heartsick about them. He has a wife (Valeria Bruni-Tedeschi) and a steady job but leaves both of them suddenly for parts unknown. His wife is worried about him, and she is angry that he left without a word. She is sufficiently concerned to seek out one of Paul’s former flames (Angela Molina) for information about where he might have gone. Soon, this girl has joined her in a quest to find Paul. They finally discover him in a Spanish resort town on the coast, moodily riding his motorcycle over the countryside and sharing philosophical musings with Antonio (Francisco Rabal), a magnetic older man who fought against Franco in the Spanish Civil War. Romantic and sexual complexities brought on by the rivalry between these two attractive women add to Paul’s malaise. ~ Clarke Fountain, All Movie Guide END_OF_DOCUMENT_TOKEN_TO_BE_REPLACED

On Capri, an Italian crew makes a German film of Homer’s Odyssey; Fritz Lang directs with American money. Prokosch, the producer, with his sneer and red Alfa, holds art films in contempt and hires writer Javal to help Lang commercialize the picture. Against this backdrop, we watch the breakup of Javal’s marriage to Camille, a young former typist. It opens with the couple talking in bed, she asking assurance that he finds her attractive. Later that day he introduces her to Prokosch, and, unawares, blunders unforgivably. The rest of the film portrays her, in their apartment and in public, expressing her hurt and change of heart and his slow grasp of the source of her contempt. END_OF_DOCUMENT_TOKEN_TO_BE_REPLACED 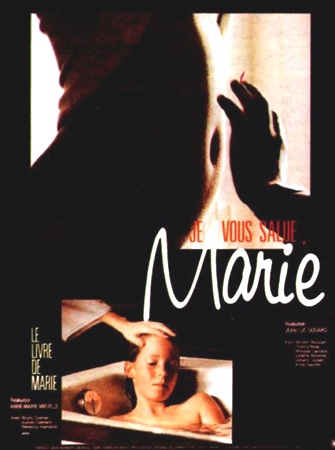 In this contemporary retelling of the birth of Christ, the Virgin Mary is a gas station employee and Joseph her taxi-driving boyfriend. Mary is an ordinary teenager playing basketball, but who vows to maintain her chastity. Following a warning from an avuncular angel, a confused Mary unexpectedly falls pregnant and is forced to wed Joseph. He in turn must love his virgin bride from a distance, revering her without touching her. END_OF_DOCUMENT_TOKEN_TO_BE_REPLACED

During the 1970’s Jean Luc Godard abandoned the notion of making normal commercial films for cinematic distribution in favour of his Marxist-Leninist ‘Dziga Vertov’ propaganda films. The director returned to regular filmmaking in 1980 with Sauve Qui Peut (La Vie), his first theatrical release since his furious outburst against modern bourgeois society in 1967 with Weekend. Delivering another hate-filled attack on almost every aspect of modern society, it’s like he had never been away. END_OF_DOCUMENT_TOKEN_TO_BE_REPLACED

PotMatters Review :
Captured in beguilingly chic noir et blanc, Jean Luc Godard’s Une Femme Mariée (A Married Woman) is an erudite, somewhat autobiographical, handsome and twisted examination of female infidelity. Although it has been rather overlooked amidst Godard’s formidable body of work, it is one of his most alluring and personal cinematic endeavours and represents a critical juncture in his evolution as a film-maker. END_OF_DOCUMENT_TOKEN_TO_BE_REPLACED

Description: Everything returns to normal after Chernobyl. That is, everything but art. Most of the great works are lost, and it is up to people like William Shakespear Junior the Fifth to restore the lost artwork of the human race. He finds strange goings-on at a resort enough to remind him of all the lines of the play, dealing with mob boss Don Learo and his daughter Cordelia, a strange professor named Jean Luc-Godard (sic), who repeatedly xeroxes his hand for no particular reason. He is followed by four humanoid goblins that keep tormenting Cordelia. There is also the gentleman whose girlfriend, Valerie, isn’t always visible. Then the film is sent off to New York for Mr. Alien to edit. END_OF_DOCUMENT_TOKEN_TO_BE_REPLACED

With its giddily complex noir plot and color-drenched widescreen images, Made in U.S.A was a final burst of exuberance from Jean-Luc Godard’s early sixties barrage of delirious movie-movies. Yet this chaotic crime thriller and acidly funny critique of consumerism—starring Anna Karina as the most brightly dressed private investigator in film history, searching for a former lover who might have been assassinated—also points toward the more political cinema that would come to define Godard. Featuring characters with names such as Richard Nixon, Robert McNamara, David Goodis, and Doris Mizoguchi, and appearances by a slapstick Jean-Pierre Léaud and a sweetly singing Marianne Faithfull, this piece of pop art is like a Looney Tunes rendition of The Big Sleep gone New Wave. (Criterion) END_OF_DOCUMENT_TOKEN_TO_BE_REPLACED