Marilyn Jordan (Susan Anspach) is a bored, depressed American housewife, married to a rich Swedish businessman with two seemingly perfect children. She tries to “spice up” her existence by surprising the family when she eats their entire dinner, setting the bedclothes on fire and poisoning the pet dog’s milk and then advising it not to drink (the dog does not drink). Eventually Martin, Marilyn’s husband, decides to show her to a psychiatrist, but that only serves to further her frustration. END_OF_DOCUMENT_TOKEN_TO_BE_REPLACED 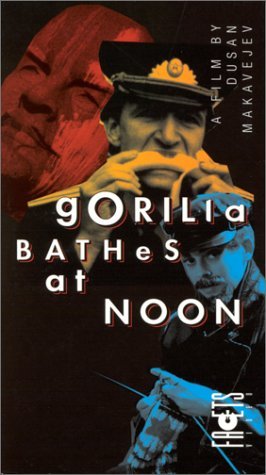 Not long afterward, workers begin detaching the head of the statue from its body. Lifted by crane, the severed head is lowered slowly onto a flatbed truck and carted off through the streets of Berlin. So much for Communism and kitsch monuments exalting its heroes.
END_OF_DOCUMENT_TOKEN_TO_BE_REPLACED 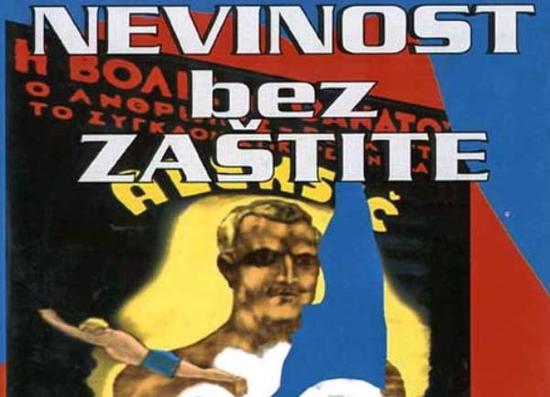 Quote:
Innocence Unprotected was originally filmed in 1941 under the title Nevinoz bez Zastite; it was meant to be the first all-talking feature ever made in Serbia. Yugoslav gymnast Dragolijub Aleksic wrote, produced, directed and starred in this simple tale of a young man who rescues his lady love from her wicked stepmother. The film was never released, falling victim to the Nazi censors; later on, the film was condemned as pro-Nazi (huh?) Flash-forward to 1968: documentary filmmaker Dusan Makavejev unearthed this forgotten film, expanded upon it with newsreel footage of Dragolijub Aleksic performing his athletic feats and filmed interviews with the surviving cast members, and came up with Innocence Unprotected. The result is less a dramatic film than a montage-like celebration of Yugoslavian customs, folklore, and humor. Makavejev referred to Innocence Unprotected as a “montage of attractions”; viewers will no doubt find those attractions most attractive. END_OF_DOCUMENT_TOKEN_TO_BE_REPLACED 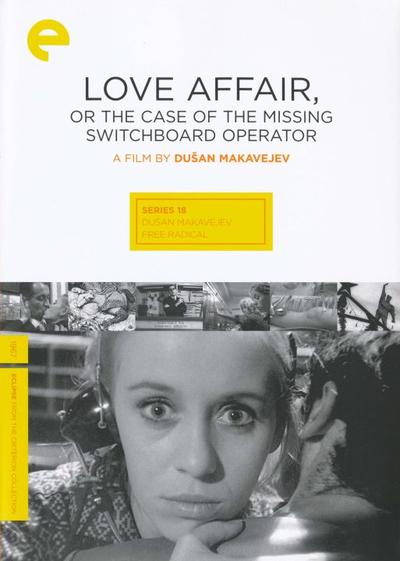 An early (1967) film by Dusan Makavejev, the master of the eastern European dirty joke (WR: Mysteries of the Organism, Montenegro). The passionate affair of a telephone operator and a Marxist rodent exterminator is intercut with lectures on criminology and sexology, with occasional cooking lessons. It’s very funny and, with its ragged arrangement of warring styles and ideologies, very original: it’s like a smutty, sticky-fingered Godard. – Dave Kehr, The Chicago Reader END_OF_DOCUMENT_TOKEN_TO_BE_REPLACED 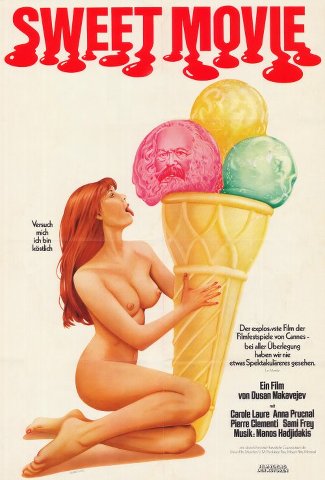 Dušan Makavejev’s anarchic 1974 comedy goes even further than his previous W.R., depicting more trangressions than the average viewer’s imagination could conjure up.

From Time Out London:
Potentially one of the most scandalous films ever made—except that it has been little seen outside France and has not aged well. Seemingly completely episodic, the ‘plot’ follows the adventures of a beauty queen (Laure), a certified virgin who escapes a disastrous honeymoon with the richest man in the world to join a group of carefree sensualists. The latter are the once-notorious Otto Muehl troupe, who delight in pissing and shitting as a public spectacle. This is cross-cut with the journey of the good ship SS Survival (which sports Karl Marx for a masthead) on the Seine. Laure herself sought legal suppression of certain shots which, in their blanked out form, ironically suggest even more sexual activity on her part. Sadly, this highly idiosyncratic melange of sex and politics, for all its liberating pretensions, only served to put Makavejev’s career back a good few steps. –David Thompson END_OF_DOCUMENT_TOKEN_TO_BE_REPLACED 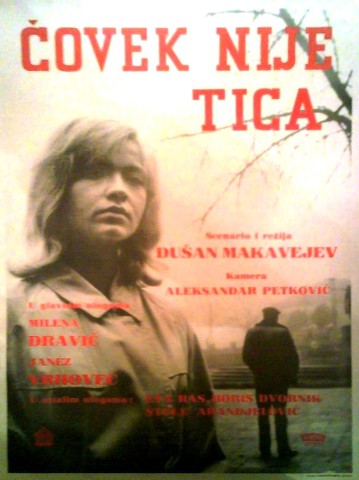 From Time Out London:
Makavejev’s first feature is a delightful, typically eccentric concoction, centred very loosely indeed around a story about an engineer who visits a new town to assemble mining machinery. There his devotion to work fouls up his relationship with his beloved, while a fellow worker encounters problems when his wife discovers he has a mistress. A freewheeling kaleidoscope mixing comedy and social comment as it deals with both labour and sexual politics, not to mention many seemingly unrelated topics such as hypnotism and culture (there’s a marvellous climactic scene with Beethoven performed in an enormous foundry while the heroine conjures her own ode to joy), it defies description but is extremely entertaining. – Geoff Andrew
END_OF_DOCUMENT_TOKEN_TO_BE_REPLACED

Dusan Makavejev – Manifesto aka A Night of Love (1988) In a Central European country a provincial town prepares for the king’s visit, and the chief of the secret police arrives to uncover a suspected anarchist plot. This is perhaps Makavejev’s most “mainstream” film, and an unexpected delight. Its pleasures are both the director’s usual satirical commentary on revolutionary politics, and the eccentricities and quirks of the individual characters and their bizarre, mad interactions. END_OF_DOCUMENT_TOKEN_TO_BE_REPLACED