In this dark crime drama, the trouble begins when a San Francisco bookie attempts to lead an honest life by marrying a comely widow. In preparation for his nuptials, the fellow stays on the straight and narrow, but when he learns that one of his cohorts has been murdered by an East Coast gang that is trying to horn in on West Coast territory, he reenters the underworld. A boyhood friend who became a cop tries to convince him to team up with the police, but the vengeful bookie remains determined to things his way. It proves to be a tragic mistake and shows the bookie that those closest to him are not what they seem.
— Sandra Brennan END_OF_DOCUMENT_TOKEN_TO_BE_REPLACED 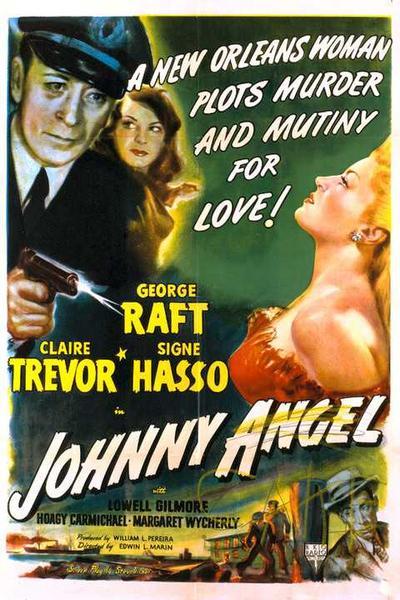 Synopsis:
RKO Radio’s Johnny Angel was adapted by Steve Fisher and Frank Gruber from a short story by Charles Gordon Booth. In one of his better performances, George Raft plays sea captain Johnny Angel, who doggedly pursues the no-good rats who murdered his father and swiped a shipment of gold bullion. Along the way, Johnny crosses paths (and words) with Lilah (Claire Trevor), the faithless wife of his boss, and French stowaway Paulette (Signe Hasso), apparently the only witness to the murder-hijacking. Aiding and abetting Johnny is philosophical cab driver Celestial O’Brien, engagingly played by songwriter Hoagy Carmichael. END_OF_DOCUMENT_TOKEN_TO_BE_REPLACED