Plot Synopsis
This is a stripped down (but still excellent) version of “The Brothers Karamazov.” Young Dimitri Karamasoff, on leave from the army, returns home to ask his father for money to get married. When he arrives he finds that his father has become smitten with a young woman of extremely questionable character named Gruschenka. His father gruffly rebuffs Dimitri’s request for money. Dimitri immediately seeks out his fathers lover to demand that she break off the engagement. Things get a bit more complicated when his anger towards her turns to infatuation – and eventually obsession. Dimitri and his father are both mad for Gruschenka, but she doesn’t want anything from either of them – except their money. Things come to a head when the old man is found murdered. Did Dimitri really commit patricide? Or is there more to the story? END_OF_DOCUMENT_TOKEN_TO_BE_REPLACED 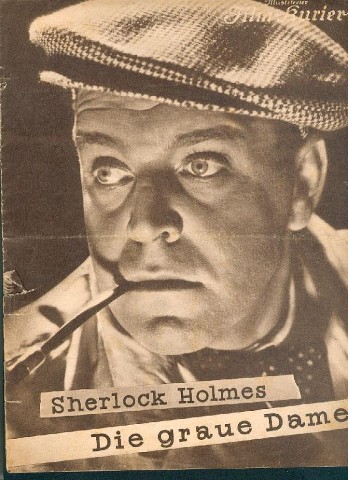 A bizarre cash-in, Die Graue Dame is a quasi-Holmes picture based on a theatrical play entirely unrelated to the works of Doyle and released shortly after the Bruno Güttner-starring Der Hund von Baskerville (1937). Here, young Jimmy Ward – played by Hermann Speelmans (1906-1960), who’d featured in the vile Nazi propaganda feature Hitlerjunge Quex: ein Film vom Opfergeist der Deutschen Jugend (1933), an immorality tale designed to drum up recruitment into the Hitler Youth – infiltrates a criminal gang, only to reveal at the last moment that he is, in fact, none other than an undercover Sherlock Holmes. One can only presume that the ‘John’ – who, according to the credits list, acts as Holmes’ ‘servant’ – was intended to be none other than the hapless Dr Watson. ~Alan Barnes, Sherlock Holmes on Screen END_OF_DOCUMENT_TOKEN_TO_BE_REPLACED