La falaise is the first short film by Faouzi Bensaïdi, a Moroccan director who has continued, after this first success already showing his special leg, with Trajet and Le mur , then feature films, including A Thousand Months , noticed at Cannes, and the last one. date, Volubilis . This film, in theaters at the moment, reveals, like La falaise , the director’s interest and concern for his country, for his pains and his peculiarities. In both works, there is an important social dimension and an exacerbated dramatic sense. END_OF_DOCUMENT_TOKEN_TO_BE_REPLACED 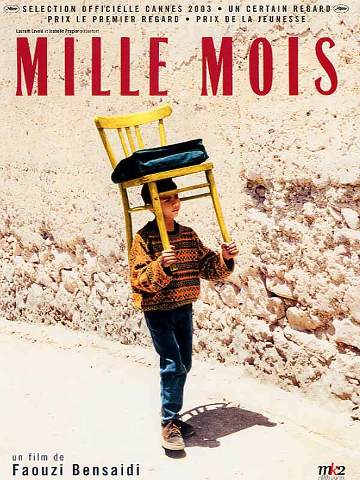 A Thousand Months, the first full-length feature from Moroccan writer-director Faouzi Bensaïdi, sets out as if to offer us a winsome child’s-eye view of life in an Atlas mountains village in the early 1980s, as seven-year-old Mehdi (Fouad Labied) wonderingly observes the new moon that marks the start of the holy month of Ramadan. But the film soon develops into something more complex – more like a vivid North African reworking of Robert Altman’s Short Cuts. Of the various interlocking characters and events that make up the plot, several impinge only marginally on Mehdi. This tactic is a deliberate attempt to subvert our expectations. “I like to lure the audience along a path that seems to be marked out and reassuring,” Bensaïdi says, “only to make them lose it instantly. The centre keeps shifting and what seems to be the margin becomes the magnet that attracts all the rest to it, only to disappear and be replaced by other peripheral elements.” END_OF_DOCUMENT_TOKEN_TO_BE_REPLACED