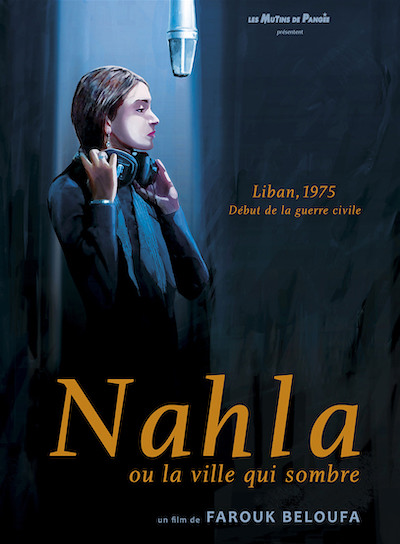 Synopsis and context
Produced by the algerian television, praised by critics but ignored by the audience, Nahla tells the story of Larbi, an algerian journalist who finds himself taken by surprise in the whirlpool of the events of the lebanese civil war, after the battle of Kfar Chouba in january 1975. By shooting Nahla three years later, with a script written with the collaboration of Rachid Boudjedra and Mouny Berrah, Farouk Beloufa says that he looked for a very raw realism in order to develop four stories in one: Larbi’s (the young male journalist), Maha’s and Hind’s (a female journalist and a female activist), and Nahla’s (a female singer). They all assists the construction of the myth of Nahla, the singer adulated by the Arab population. But Nahla loses her voice on stage, the atmosphere of crisis that reigns around her develops like an infection, while Beirut is under the attack of bombs. Larbi, while fascinated at the beginning, loses control, and gets himself in an inextricable situation. END_OF_DOCUMENT_TOKEN_TO_BE_REPLACED