In the summer of 1974, Xing-Yu (Shu Qi) meets and falls in love with a rebel, Si-Mong. A member of the Chinese People’s Army, her comrades immediately frown on their relationship. Her leader and childhood sweetheart, Yuan, then enlists her in a plan to betray Si-Mong in exchange for a discharge so she may return home to care for her sick father. Will Xing-Yu choose country and politics over love? END_OF_DOCUMENT_TOKEN_TO_BE_REPLACED

In the course of cinematic history, there have been many great quests: searches for the Holy Grail, the Ark of the Covenant, the true nature of Humankind, the essence of God, and, during this film from Chinese director Zhou Xiaowen, a 29-inch television. In Ermo, a somewhat better- constructed cousin to Zhang Yimou’s The Story of Qui Ju, we follow the obsessive struggle of one woman (Alia) to earn the money to buy the biggest television in her village. There’s no sacrifice she won’t make, an attitude that her aging, impotent husband (Ge Zhijun) is incapable of understanding. In his view, money is for building houses, not buying gadgets. END_OF_DOCUMENT_TOKEN_TO_BE_REPLACED 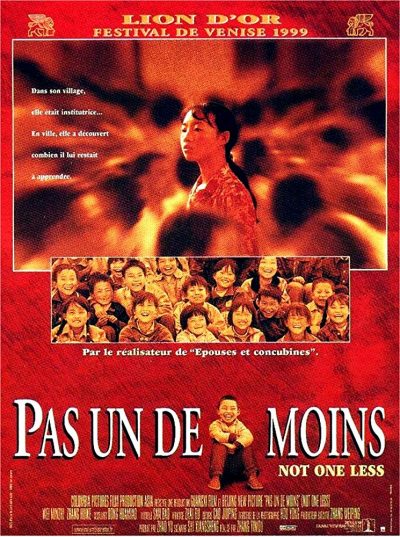 Quote:
In a remote mountain village, the teacher must leave for a month, and the mayor can find only a 13-year old girl, Wei Minzhi, to substitute. The teacher leaves one stick of chalk for each day and promises her an extra 10 yuan if there’s not one less student when he returns. Within days, poverty forces the class troublemaker, Zhang Huike, to leave for the city to work. Minzhi, possessed of a stubborn streak, determines to bring him back. She enlists the 26 remaining pupils in earning money for her trip. She hitches to Jiangjiakou City and begins her search. The boy, meanwhile, is there, lost and begging for food. Minzhi’s stubbornness may be Huike and the village school’s salvation. END_OF_DOCUMENT_TOKEN_TO_BE_REPLACED

Stephen Holden in the New York Times wrote:
[The film] belongs to that rarefied breed of antiwar movie that adopts a lofty satirical distance from its characters’ plight. By turns farcical and horrifying, it scrupulously avoids plucking heartstrings to portray the soldiers and peasants alike as paranoid fools buffeted by the shifting winds of war…While acknowledging that war is hell, it goes further to suggest it is ludicrous. END_OF_DOCUMENT_TOKEN_TO_BE_REPLACED

Imdb:
Delamu ¨C Tibetan for “Peace Angel”. Since ancient times, China’s two primary land routes connecting it to the outside world have been the Silk Road in the north, and Tea Horse-Road in the south. The mountain village of Bingzhongluo-Tibetan for “Village of Tibetans” is located on the high plateau of western Yunnan Province, at the foot of Gaoligong Mountain. Traveling along the Nujiang River, one can reach the southern Tibetan border town of Chawalong-Tibetan for “Valley of Dry Heat.” But with no roads connecting the two places, since ancient times the transport of all goods and supplies has relied entirely on horse caravans. The journey of more than 90 kilometers zigzags through high mountain slopes, dense forests, gorges and wastelands. END_OF_DOCUMENT_TOKEN_TO_BE_REPLACED

Quote:
In ancient China, before the reign of the first emperor, warring factions throughout the Six Kingdoms plot to assassinate the most powerful ruler, Qin. When a minor official defeats Qin’s three principal enemies, he is summoned to the palace to tell Qin the story of his surprising victory. END_OF_DOCUMENT_TOKEN_TO_BE_REPLACED