Quote:
The Doll Merchant (1955), a fairy tale for adults directed by Jack Witikka, is based on a radio play by Walentin Chorell. The titular doll merchant, played by Martti Katajisto, refuses to conform to the norms of an anonymous totalitarian state. The dictator of the state (Tauno Palo) thinks the merchant is a rebel and has him arrested. However, the dictator’s lover Lilith (Hillevi Lagerstam) is very fond of dolls, as is the little girl (Leena Kaprio), who is helped by an anarchist (Heikki Savolainen) in her search for the doll merchant. The many dolls seen in the film were made by Mona Leo. END_OF_DOCUMENT_TOKEN_TO_BE_REPLACED

Quote:
The enigmatically titled Take Care of Your Scarf, Tatjana [Pidä huivista kiinni, Tatjana] is Kaurismäki’s take on the road movie. It represents something of a contradiction for non-Finnish viewers, being one of the director’s most accessible films but also one whose subtleties are unlikely to be fully understood by a foreign audience, and I’m including myself in that sweeping suggestion. END_OF_DOCUMENT_TOKEN_TO_BE_REPLACED

from cinematik
Saimaa-ilmiö is probably the first properly made rock film made in Finland. Such basics as including the songs in their entirety, shooting with multiple cameras, reducing interviews to a minimum and using them to express the atmosphere, not as compulsory fillers-in, were unheard of in Finland at the time. Concentrating on the music, not everything around it, Saimaa-ilmiö captures much of the leisurely feel of the lake tour. END_OF_DOCUMENT_TOKEN_TO_BE_REPLACED

Quote:
When I heard that Aki Kaurismaki was making a silent black-and-white feature, I expected something arch and postmodernist. Yet in spite of a few flashes of mordant humor, some wonderfully spare sound effects, and a few minimalist lighting schemes that suggest 50s Hollywood, this 1999 film is a moving pastiche whose strength is its sincerity and authenticity. A fallen-woman story set in the present, featuring a farm couple and an evil playboy from the city who lures the wife away, it conveys the sort of purity and innocence associated with silent cinema storytelling, including a love of nature and animals, a taste for stark melodrama, and an emotional directness in the acting–evocative at various times of Griffith in the teens and Murnau in the 20s. END_OF_DOCUMENT_TOKEN_TO_BE_REPLACED 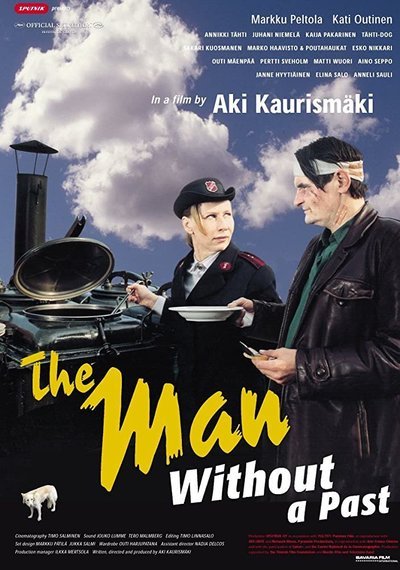 Quote:
The second part of Aki Kaurismäki’s “Finland” trilogy, the film follows a man who arrives in Helsinki and gets beaten up so severely he develops amnesia. Unable to remember his name or anything from his past life, he cannot get a job or an apartment, so he starts living on the outskirts of the city and slowly starts putting his life back on track. END_OF_DOCUMENT_TOKEN_TO_BE_REPLACED

Synopsis:
A married couple struggles with the repercussions of unexpected unemployment in this wry comedy drama from Finnish filmmaker Aki Kaurismaki. Ilona, the wife, works as restaurant hostess and her husband Lauri drives a tram. Though the couple has recently lost a child, they both seem at peace and happy. One night Ilona comes home and finds that Lauri has purchased a beautiful television on credit. Shortly thereafter disaster strikes when Ilona’s workplace closes and Lauri gets caught in a maelstrom of downsizing. Neither is able to find suitable work right away and as time crawls by, they become humiliated and testy with each other. END_OF_DOCUMENT_TOKEN_TO_BE_REPLACED Quote:
In this Finnish comedy, which features all-English dialogue and nary a Scandanavian in it, Henri Boulanger (Jean-Pierre Leaud), is a colorless English civil servant, who was given a speedy retirement when his agency was “privatized,” complete with a gold watch. His life is so barren that removing even the empty activities of his job makes it not worth living, so he attempts suicide by sticking his head in a gas oven – just as a gas service strike gets underway. Frustrated, he takes his savings from the bank and heads off to hire a contract killer to take his life from him. Then he really begins to enjoy life – so much so, that now he wants to avoid his imminent demise. —Clarke Fountain, Rovi END_OF_DOCUMENT_TOKEN_TO_BE_REPLACED