Storyline
What do you dream of when you’re 16 years old and in a seaside resort in Normandy in the 1980s? A best friend? A lifelong teen pact? Scooting off on adventures on a boat or a motorbike? Living life at breakneck speed? No. You dream of death. Because you can’t get a bigger kick than dying. And that’s why you save it till the very end. The summer holidays are just beginning, and this story recounts how Alexis grew into himself. -Imdb END_OF_DOCUMENT_TOKEN_TO_BE_REPLACED

Synopsis:
One morning at an isolated mansion in the snowy countryside of 1950s France, a family is gathered for the holiday season. But there will be no celebration at all because their beloved patriarch has been murdered! The killer can only be one of the eight women closest to the man of the house. Was it his powerful wife? His spinster sister-in-law? His miserly mother-in-law? Maybe the insolent chambermaid or the loyal housekeeper? Could it possibly have been one of his two young daughters? A surprise visit from the victim’s chic sister sends the household into a tizzy, encouraging hysterics, exacerbating rivalries, and encompassing musical interludes. Comedic situations arise with the revelations of dark family secrets. Seduction dances with betrayal. The mystery of the female psyche is revealed. There are eight women and each is a suspect. Each has a motive. Each has a secret. Beautiful, tempestuous, intelligent, sensual, and dangerous…one of them is guilty. Which one is it?
— Anthony Pereyra (IMDb) END_OF_DOCUMENT_TOKEN_TO_BE_REPLACED

Quote:
Screwball comedy master Ernst Lubitsch took a rare stab at straight drama with 1932’s “Broken Lullaby,” the tense story of a soldier who attempts to make amends with the family of a man he killed in World War I. Preeminent French director François Ozon also wanders into unconventional territory with “Frantz,” his astonishingly beautiful and inquisitive remake of Lubitsch’s film, using it as a springboard for a profound look at alienation and grief. END_OF_DOCUMENT_TOKEN_TO_BE_REPLACED

French bad boy director François Ozon, who caused a stir with his controversial first feature Sitcom (1998) and his shorts A Summer Dress (1997) and See the Sea (1997), creates a dark and brooding tale of transgression and sexuality for his second feature outing. Alice (Natacha Régnier) is a bored, spoiled high schooler with a gorgeous body and a sociopathic mind. She persuades one of her suitors, the naive and trusting Luc (Jeremie Renier), to murder another suitor, the handsome, rakish Said (Salim Kechiouche). END_OF_DOCUMENT_TOKEN_TO_BE_REPLACED

Quote:
Like every summer, a wife and husband go to their beach house in Les Landes for the vacation. But this year, while Marie is napping on the beach, husband Jean disappears. Has he drowned? Run away? He’s vanished without trace. A few months later, we meet Marie again in Paris… END_OF_DOCUMENT_TOKEN_TO_BE_REPLACED

When her husband goes missing at the beach, a female professor begins to mentally disintegrate as her denial of his disappearance becomes delusional. END_OF_DOCUMENT_TOKEN_TO_BE_REPLACED 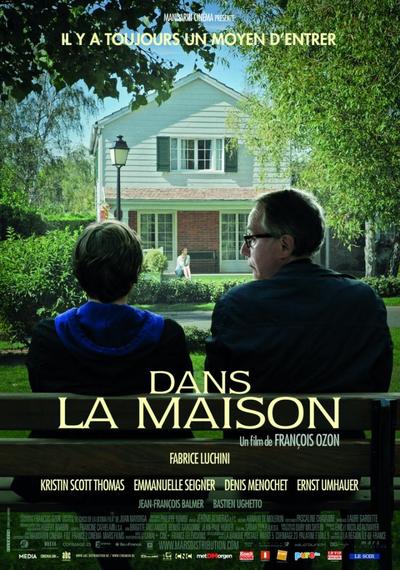 A sixteen-year-old boy insinuates himself into the house of a fellow student from his literature class and writes about it in essays for his French teacher. Faced with this gifted and unusual pupil, the teacher rediscovers his enthusiasm for his work, but the boy’s intrusion will unleash a series of uncontrollable events. END_OF_DOCUMENT_TOKEN_TO_BE_REPLACED