A famous opera singer, Giorgio Fini, loses his voice during an American tour. He goes to a female throat specialist, Faye Kennedy, whom he falls in love with. END_OF_DOCUMENT_TOKEN_TO_BE_REPLACED

Synopsis:
“Patton” tells the tale of General George S. Patton, famous tank commander of World War II. The film begins with Patton’s career in North Africa and progresses through the invasion of Europe and the fall of the Third Reich. Side plots also speak of Patton’s numerous faults such his temper and tendency toward insubordination, faults that would prevent him from becoming the lead American general in the Normandy Invasion as well as to his being relieved as Occupation Commander of Germany. END_OF_DOCUMENT_TOKEN_TO_BE_REPLACED 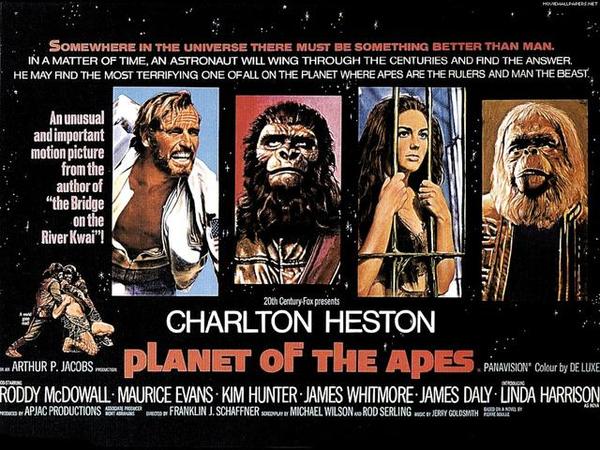 Quote:
Originally intended as a project for Blake Edwards, the film version of Pierre Boule’s semisatiric sci-fi novel came to the screen in 1968 under the directorial guidance of Franklin J. Schaffner. Charlton Heston is George Taylor, one of several astronauts on a long, long space mission whose spaceship crash-lands on a remote planet, seemingly devoid of intelligent life. Soon the astronaut learns that this planet is ruled by a race of talking, thinking, reasoning apes who hold court over a complex, multilayered civilization. In this topsy-turvy society, the human beings are grunting, inarticulate primates, penned-up like animals. When ape leader Dr. Zaius (Maurice Evans) discovers that the captive Taylor has the power of speech, he reacts in horror and insists that the astronaut be killed. END_OF_DOCUMENT_TOKEN_TO_BE_REPLACED