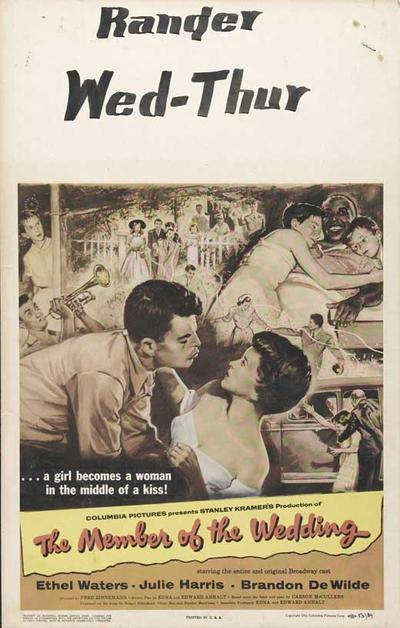 Quote:
A film version of the Carson McCullers play. Frankie Addams, a very boyish articulate 12-year-old girl, is going through an unhappy stage of her life, having been spurned by the neighborhood girls. She spends most of her time in the kitchen talking to her black maid, Bernice, and the younger next door boy, John Henry. Her brother Jarvis is about to marry Janice, and Frankie imagines that she will leave town with them. However she eventually begins to grow up into a young woman. END_OF_DOCUMENT_TOKEN_TO_BE_REPLACED

Plot Synopsis
Rodgers and Hammerstein’s 1943 Broadway music’s 1943 Broadway musical was considered revolutionary for a multitude of reasons, not least of which were the play’s intricate integration of song and storyline, and the simplicity and austerity of its production design. The 1955 film version of Oklahoma! retains the songs (except for Lonely Room and It’s a Scandal!, which are usually cut from most stage presentations anyway) and the story, but the simplicity is sacrificed to the spectacle of Technicolor, Todd-AO, and Stereophonic Sound. The story can be boiled down to a single sentence: a girl must decide between the two suitors who want to take her to a social. In her movie debut, 19-year-old Shirley Jones plays Laurie, an Oklahoma farm gal who is courted by boisterous cowboy Curley (Gordon MacRae) and by menacing, obsessive farm hand Jud Frye (Rod Steiger). Fearing that Jud will do something terrible to Curley, Laurie accepts Jud’s invitation to the box social. But it’s Curley who rescues Laurie from Jud’s unwanted advances, and in so doing wins her hand. On the eve of their wedding, Laurie and Curley are menaced by the drunken Jud. END_OF_DOCUMENT_TOKEN_TO_BE_REPLACED