(kinoglaz.fr)
On the first day of the war fascists brutally killed the little son of a peasant woman Praskovya Lukyanova before the mother’s eyes. Her husband was also killed. Praskovya leaves the village. She goes to woods, organizes a partisan detachment and takes vengeance on the enemy.
The film was restored at the Gorky Film Studio in 1966.
 The authors of the film were honored the Stalin’s Prize of the USSR. END_OF_DOCUMENT_TOKEN_TO_BE_REPLACED 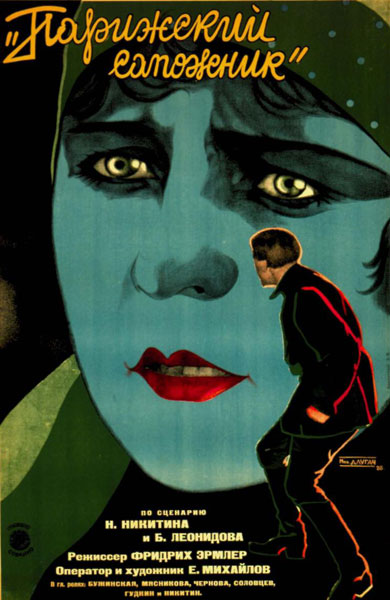 Friedrich Ermler (1898-1967) remains one of the shadowy figures of the early Soviet cinema, known if at all for his psychological parable Fragment of an Empire. But he was a major force among the Leningrad filmmakers of the 1920s and ’30s, whose sympathies lay closer to youth and realism than to the monumental frescoes of the Moscow ‘masters.’ The Parisian Cobbler is impossible to hide from inquisitive looks and gossips in a small provincial town. Film tackled a controversial theme head-on: the sexual exploitation of women by party activists in the name of ‘free love.’ Hapermill worker, Young Communist Leaguer Katya and Andrei are not hiding their love. All of a sudden Katya’s radiant hopes break to pieces: Andrei is indignant to hear the news that Katya is expecting a baby. He does not want “to change diapers”, this “trivial life” will interfere with his plans to “build bright future”. Katya is befriended by a cobbler who, as a mute, knows what it is to be a social outcast. Ermler’s spare and uncompromising style reveals the extent to which realism was already on the agenda before it became a repressive slogan in the mid-thirties. As usual with Ermler, the film is not only about a problem, but is also about everyday life. END_OF_DOCUMENT_TOKEN_TO_BE_REPLACED