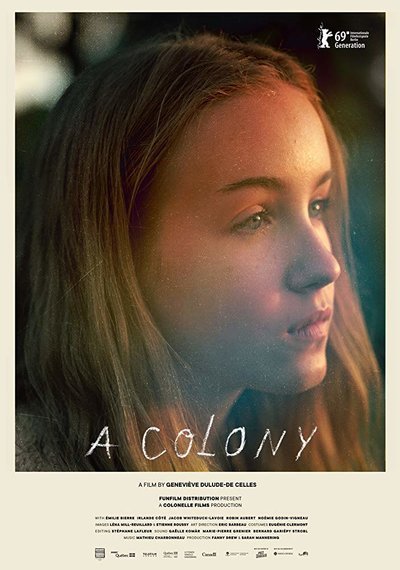 Quote:
Colony is a Canadian drama film from Quebec, directed by Geneviève Dulude-De Celles and released in 2018. The film centres on Mylia, a young girl starting high school who is torn between her new friendships with Jacinthe, a bad influence who encourages her to experiment with sex and alcohol, and Jimmy, an artistic First Nations student. The film’s cast also includes Irlande Côté as Mylia’s younger sister Camille, and Noémie Godin-Vigneau and Robin Aubert as their parents.
Camille wanders through the countryside talking with frogs and chickens: she sails through life as a carefree soul. But for her older sister, the introverted Mylia, things are more complicated. Mylia is lost between the uncertainty in her family life, the superficial atmosphere at her new school and her first experiences at house parties. It is Camille who eventually introduces Mylia to Jimmy. The boy from the nearby Abenaki reserve is different and he encourages her to break free. END_OF_DOCUMENT_TOKEN_TO_BE_REPLACED