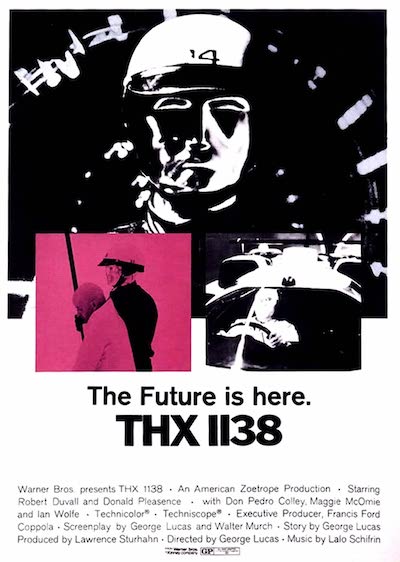 Quote:
A chilling exploration of the future is also a compelling examination of the present in George Lucas’ ‘THX 1138’, starring Robert Duvall as a man whose mind and body are controlled by the government. THX makes an harrowing attempt to escape from a world where thoughts are controlled, freedom is an impossibility and love is the ultimate crime. END_OF_DOCUMENT_TOKEN_TO_BE_REPLACED

It’s the last night of summer 1962, and the teenagers of Modesto, California, want to have some fun before adult responsibilities close in. Among them are Steve (Ron Howard) and Curt (Richard Dreyfuss), college-bound with mixed feelings about leaving home; nerdy Terry “The Toad” (Charles Martin Smith), who scores a dream date with blonde Debbie (Candy Clark); and John (Paul Le Mat ), a 22-year-old drag racer who wonders how much longer he can stay champion and how he got stuck with 13-year-old Carol (Mackenzie Phillips) in his deuce coupe. As D. J. Wolfman Jack spins 41 vintage tunes on the radio throughout the night, Steve ponders a future with girlfriend Laurie (Cindy Williams), Curt chases a mystery blonde, Terry tries to act cool, and Paul prepares for a race against Bob Falfa (Harrison Ford), but nothing can stop the next day from coming, and with it the vastly different future ushered in by the 1960s. END_OF_DOCUMENT_TOKEN_TO_BE_REPLACED