An early example of ultra-realism, this movie contrasts the quiet, bucolic life in the outskirts of Paris with the harsh, gory conditions inside the nearby slaughterhouses. Describes the fate of the animals and that of the workers in graphic detail.
Xavier Martin on IMDB END_OF_DOCUMENT_TOKEN_TO_BE_REPLACED

The film highlights key moments in the life and professional collaboration of Pierre Curie and Marie Curie. END_OF_DOCUMENT_TOKEN_TO_BE_REPLACED

Film Review
Georges Franju’s last film for the cinema was to be his second homage to the silent Louis Feuillade crime serials of the 1910s – the first being his inspired remake of Judex in 1963. Nuits rouges is a curious cinematic beast that owes as much to the adolescent American fantasy-thriller serials of the 1940s and 1960s as it does to Feuillade. It is certainly not what you would have expected from a man with a reputation as a serious filmmaker and co-founder of the Cinémathèque Française, France’s national film library. END_OF_DOCUMENT_TOKEN_TO_BE_REPLACED

A family goes on holiday, abandoning the little girl’s dog.

Quote:
Faithful regulars at screenings at La Cinémathèque française, the filmmakers of the New Wave received Langlois’s lessons as an inheritance and were, by their own admission, profoundly influenced by them. On the fringe of these habits and this famous movement, other directors, more fragile or isolated, also carried in them, thanks to other roundabout means, the teachings of the Cinémathèque’s founder who had, himself, briefly trod the path of apprentice filmmaker. In touch with young directors, he supported them as much as he could, showing their works, often previously unseen, and rightly considered it his duty to watch over them. END_OF_DOCUMENT_TOKEN_TO_BE_REPLACED 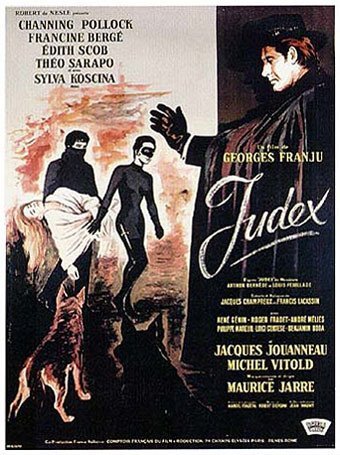 Quote:
Favraux, an unscrupulous banker, receives a threatening note, signed by “Judex”, demanding that he pay back the people he has swindled. He refuses, and apparently dies after a midnight toast at his masked ball. However, he is only drugged by Judex and locked away. Judex spares his life when the banker’s widowed daughter, Jacqueline, rejects the inheritance. Meanwhile Diana Monti, the former governess, kidnaps Jacqueline to try to get the banker’s money. But Judex is hot on her trail. END_OF_DOCUMENT_TOKEN_TO_BE_REPLACED