The Magic of Méliès
Director: Georges Méliès
Country: France
Year: 1904-1908
Tribute is paid to the screen’s first special effects wizard in this special collection of marvelously restored prints. In addition to more than a dozen of his early trompes l’oeil – such as Untamable Wiskers, Tchin-Chao, the Chinese Conjurer, and The Mermaid – this volume boasts the illuminating documentary, Georges Méliès, Cinema Magician and a rare hand-tinted print of the fantastic spectacle An Impossible Voyage. END_OF_DOCUMENT_TOKEN_TO_BE_REPLACED

Plot Synopsis:
An Egyptian prince has lost his beloved wife and he has sought a dervish who dwells at the base of the sphinx. The prince promises him a vast fortune if the dervish will only give him the opportunity of gazing once more upon the features of his wife. The dervish accepts the offer. He brings in from a neighboring tomb the receptacle containing the remains of the princess. He opens it and removes the skeleton, which he places upon the ground close beside him. Then, turning to the moon and raising his arms outstretched toward it, he invokes the moon to give back life to her who is no more. The skeleton begins to move about, becomes animated, and arises. The dervish puts it upon a bench and covers it with a white linen; a masque conceals its ghostly face. END_OF_DOCUMENT_TOKEN_TO_BE_REPLACED 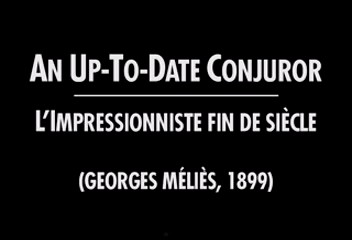 The Conjuror revisits a scene that Méliès had explored before, and is basically a cinematic adaptation of the traditional magic trick “making the assistant disappear”. Méliès first presented this scene in his 1896 film The Vanishing Lady, which used simple camera stop-substitution to achieve the affect (no motion involved, and no in-camera dissolve). Méliès revisited the idea in his 1898 film The Magician, which made further use of the substitution effect, which by that time was only one of many effects that Méliès was using in his films. END_OF_DOCUMENT_TOKEN_TO_BE_REPLACED