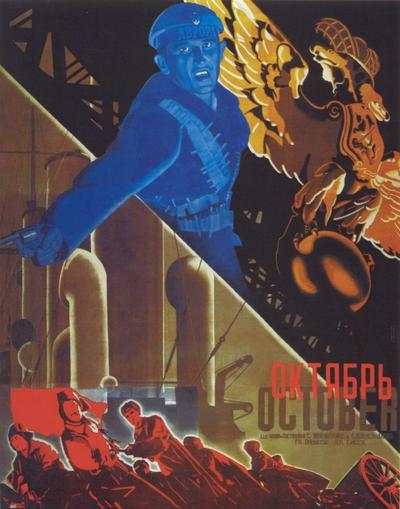 Description: Expanding on his editing experiments in Battleship Potemkin (1925), Sergei Eisenstein melded documentary realism with narrative metaphor to depict the pivotal events of the Russian Revolution in October (1927). Commissioned to commemorate the 10th anniversary of the 1917 October Revolution, Eisenstein focused on a few key events from February 1917 to October 1917. Underlining the symbolic importance of those episodes, Eisenstein constructed October as an elaborate “intellectual montage,” deriving meaning from the metaphorical or symbolic relationships between shots. Drawing out narrative time through cutting, Eisenstein turns an opening drawbridge into a sign of the divisive struggle in St. Petersburg. Similarly exaggerating the time that it takes provisional leader Kerensky to climb a palatial staircase, and intercutting shots of Kerensky with a Napoleon statue and a mechanical peacock, Eisenstein satirically reveals Kerensky’s imperial hubris and vanity. Having done extensive research for accuracy, Eisenstein also staged mass battles, particularly the storming of the Winter Palace, with thousands of extras, including the Soviet army. Before October’s release, however, Josef Stalin’s ascent to power required Eisenstein to edit out all references to Stalin rival Trotsky. Neither the Soviet public nor the Soviet leaders cared for the finished film; the government accused Eisenstein of “formalist excess.” An edited version of the film was released in the U.S. using the title of John Reed’s book, Ten Days That Shook the World. While the film’s whole is not as great as its parts, the abstract power and narrative innovation of its greatest sequences still render it a seminal work in the development of film form.
~Lucia Bozzola allmovie END_OF_DOCUMENT_TOKEN_TO_BE_REPLACED