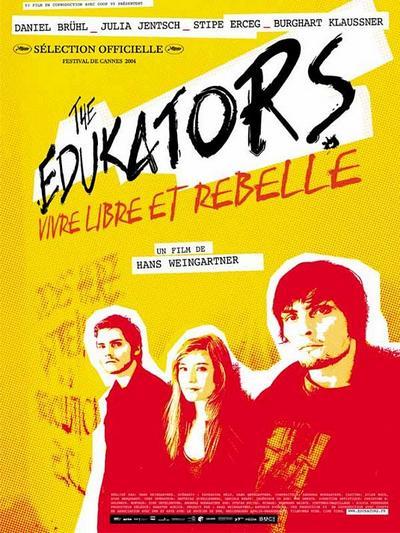 The Edukators (German: Die fetten Jahre sind vorbei) is a German-Austrian film made by the Austrian director Hans Weingartner and released in 2004. Nominated for the Palme d’Or at the 2004 Cannes Film Festival,[1] it stars Daniel Brühl, Stipe Erceg and Julia Jentsch.

The original German title, Die fetten Jahre sind vorbei translates literally as “the fat years are over”. Die fetten Jahre is a German expression originating from the story of Joseph in Egypt as found in the Luther Bible, meaning a period in which one enjoys considerable success and indulges oneself heavily. The official translation of the statement as used in the film and the subtitle to the English-language release was “Your days of plenty are numbered.”

The film was generally well received by critics. Based on 74 reviews collected by Rotten Tomatoes, the film has an overall approval rating from critics of 69%, with an average score of 6.5/10. By comparison, Metacritic, which assigns a normalized rating out of 100 top reviews from mainstream critics, calculated an average score of 68, based on 28 reviews. END_OF_DOCUMENT_TOKEN_TO_BE_REPLACED