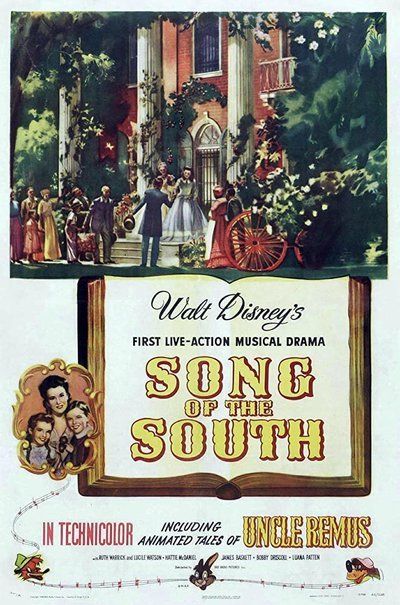 Quote:
Song of the South is a blend of live action and animation, based on the popular “Uncle Remus” stories of Joel Chandler Harris. Set in the years just after the Civil War, the story begins with young Johnny (Bobby Driscoll) being sent to live at the southern plantation of his grandmother (Lucile Watson) while his parents contemplate divorce. At first disconsolate, the boy is cheered up by African-American handyman Uncle Remus (James Baskett), who tells him many delightful fables concerning the clever trickster Br’er Rabbit, whose adventures are illustrated in cartoon form. Each story has a moral, which Johnny applies to the exigencies of his real life. Johnny’s mother (Ruth Warrick) disapproves of Uncle Remus, and orders the boy never to visit the kindly old black man again. Uncle Remus packs his bags and leaves; while chasing after him, Johnny is injured by a bull. He recovers thanks to the friendly presence of Uncle Remus, and all is forgiven. END_OF_DOCUMENT_TOKEN_TO_BE_REPLACED